Finding refuge in the back of the county home (Sacred heart home) and the fields of Rathbawn Drive  in Castlebar where now a  a whole host of houses stand. It was there where we used to hide from our parents and smoke cigarettes, build  fires and talk about the girl we admired most in school. It was here when i heard Led Zeppelin for the very first time. Back then those fields were just full of green and wild animals, good times!

Who remembers Cannings pertol pumps and the faboulous large bonfires that were held in Rathbawn in the eighties and nineties? Well, this was all within the same area.

That first time i heard Stairway to Heaven i  was simply in “Heaven” (no pun intended) From then on i used to watch old black and white videos of the group performing live on the BBC. If you get a chance, please check out Led Zeppelin Live at the BBC, one of my favourite live Zeppelin albums which catches the band at the height of their career.

But back then i wanted to be Robert Plant and of course i wanted the girls to admire me just as much as they admired him on the stage. I used to have long hair, and of course like every young kid that had long hair back then, i used to stand in front of a mirror mimicking Robert Plant’s every dance move with a hair brush for a microphone. (Come on! don’t tell me you have never done this either!)

He was so cool on stage, shirt open, tight pants and hair only a bald man would wish for! (Ahem cough! cough!) 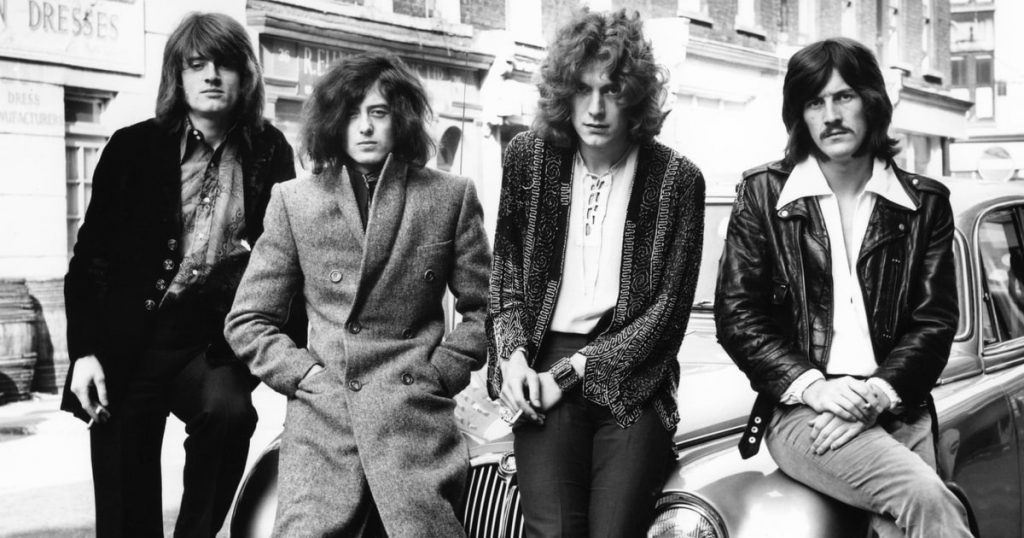 One of the most influential rock bands of all time, Led Zeppelin

Led Zeppelin’s first record was released on March 30th in 1969 on Atlantic Records, Page said that the album took only about 36 hours of studio time (over a span of a few weeks) to create (including mixing), adding that he knew this because of the amount charged on the studio bill. One of the primary reasons for the short recording time was that the material selected for the album had been well-rehearsed and pre-arranged by the band on the Scandinavian tour.

With its intriguing and now iconic artwork, Led Zeppelin’s self-titled debut album must have made an arresting sight for any patchouli-doused flower child sifting through record store racks back in January 1969. The Summer of Love was over, Altamont was just a few months away and the times they were a-changin’. Zeppelin may have been a product of the 60s, but their often bombastic style signposted a new decade and the arrival of a new breed of rock bands.

Fortunately for Zeppelin, their first effort was every bit as dramatic, dynamic and compelling as the sleeve which bound it. Recorded at London’s Olympic Studios during October 1968, it showcased an ambitious and inventive fusion of blues and rock which paved the way for virtually every big-riffing outfit of the 70s. It wasn’t heavy metal, but it sure was heavy.

It wasnt very long before Led Zeppelin II emerged in the same year at the end of 1969, Starting with the sexual-laced “Whole Lotta Love”, Led Zeppelin II makes an immediate impact due to the maturation of Plant’s voice (as well as the overall sound of the band). With a definite seventies sound, the song was born out of a live improvisation during one of the band’s many 1969 tours, with Plant accompanying Page’s riff with slightly improvised lyrics based on Muddy Waters “You Need Love”.

The studio track also included a rather psychedelic mid section built on Bonham’s jazz drumming and Page’s use of a Theremin. Without the band’s consent, an edited version of “Whole Lotta Love” was released as a single in the US and it climbed to #4 on the pop charts in early 1970. This would be the group’s highest charting single, as they were hesitant to release many more singles throughout their long career.

I remember we used to go drinking up at the old diving board in Lough Lannagh on a Friday night in  Castlebar in the nineties when it still existed. Whole Lotta Love was always the track that used to bring us together when it was blasted from the boombox on nights of heaving drinking .

“The Lemon Song” is an underrated classic, recorded live in the studio much like the material from Led Zeppelin I. This hodge-podge of many blues classics borrows from Howlin’ Wolf’s “Killing Floor”, Robert Johnson’s “Travelling Riverside Blues” and Albert King’s “Cross-Cut Saw”, and it surpasses the best blues efforts on the first album as this track is totally mesmerizing and awe inspiring.

During a long mid section, Jones bass playing is at its absolute peak, adding a funky element unheard on previous Zeppelin tracks. “Thank You” is the original “power ballad”, and the song is pretty good until after the second verse when it gets a little bit tacky. Page lays down a great acoustic lead and Jones plays a sweet keyboard outro, but Zeppelin would wisely decide to leave love ballads for other bands after this.

Their third album Led Zeppelin III was released in October of 1970, the album  deviates little from the track laid by the first two, even though they go acoustic on several numbers. Most of the acoustic stuff sounds like standard Zep graded down decibelwise, and the heavy blitzes could’ve been outtakes from Zeppelin II. In fact, when I first heard the album my main impression was the consistent anonymity of most of the songs  no one could mistake the band, but no gimmicks stand out with any special outrageousness, as did the great, gleefully absurd Orangutang Plant-cum-wheezing guitar freak-out that made “Whole Lotta Love” such a pulp classic.

“Immigrant Song” comes closest, with its bulldozer rhythms and Bobby Plant’s double-tracked wordless vocal croonings echoing behind the main vocal like some cannibal chorus wailing in the infernal light of a savage fertility rite. What’s great about it, though, the Zep’s special genius, is that the whole effect is so utterly two-dimensional and unreal. You could play it, as I did, while watching a pagan priestess performing the ritual dance of Ka before the flaming sacrificial altar in Fire Maidens of Outer Space with the TV sound turned off. And believe me, the Zep made my blood throb to those jungle rhythms even more frenziedly.

Unfortunately, precious little of Z III‘s remaining hysteria is as useful or as effectively melodramatic. “Friends” has a fine bitter acoustic lead, but gives itself over almost entirely to monotonously shrill Plant breast-beatings. Rob, give a listen to Iggy Stooge.

“Celebration Day” and “Out On the Tiles” are production-line Zep churners that no fan could fault and no one else could even hear without an effort. “Since I’ve Been Loving You” represents the obligatory slow and lethally dull seven-minute blues jam, and “Hats Off to (Roy) Harper” dedicates a bottleneck-&-shimmering echo-chamber vocal salad to a British minstrel who, I am told, leans more towards the music-hall tradition.

So on to Led Zeppelin 4, the album that introduced me to the group originally, Led Zeppelin IV was released in November of 1971. I reckon it offer a more polished display of the band, but then again this is just my opinion .

Recorded at Headley Grange in Hampshire, Island Studios in London and Sunset Sound in Los Angeles, Led Zeppelin IV is the album that put Led Zeppelin into homes around the world, acting as a successful marriage of the hard rock from their second album with the folkier meanderings of their third. It is an album that demonstrates their subtlety and restraint as much as their stadium-filling grandstanding and it confirmed their superstar rock status.

The actually untitled album (it was also known as Four Symbols or The Runes Album), a chart-topper on both sides of the Atlantic, captures the group’s schizophrenia perfectly. On the one hand, they wallop away through genre-defining rock standards such as “Rock And Roll”, “Black Dog” and “Misty Mountain Hop”; yet on the other, they are gentle and restrained on the folk mysticism of “Going To California” and the Sandy Denny co-sung “The Battle Of Evermore.” 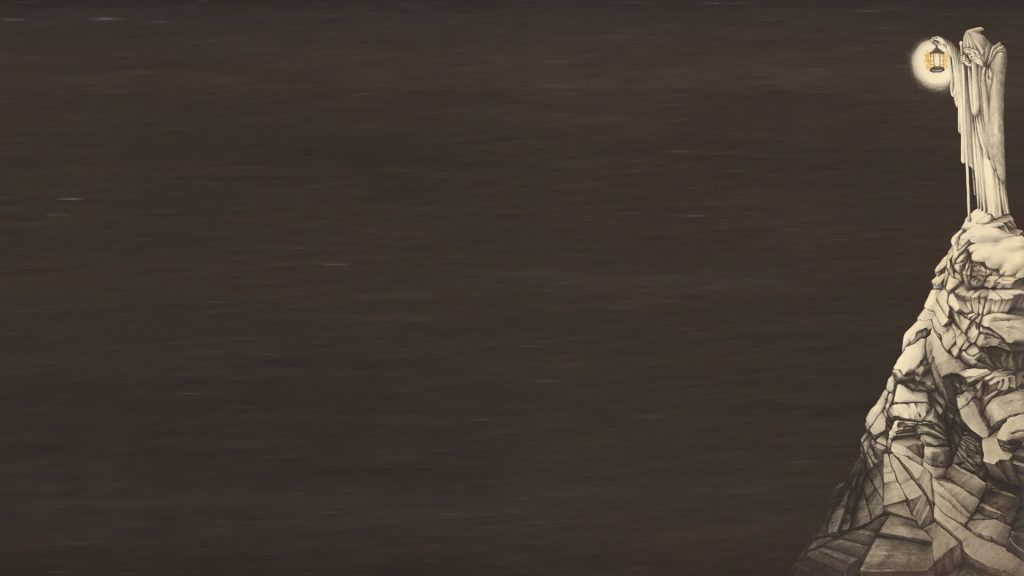 It is on their anthem, “Stairway To Heaven”, however, that both strands come together in perfect accord. Starting as a recorder-driven acoustic folk ballad, it culminates in its closing minutes as a full-on, much emulated rock classic, with Robert Plant’s vocals and Jimmy Page’s guitar both approaching career-bests. Led Zeppelin IV also demonstrates the singular talent that was drummer John Bonham – the blues driven “When The Levee Breaks” is one of the most heavily sampled drum tracks of all time.

With immaculate playing (multi-instrumentalist John Paul Jones’ contributions are not to be underestimated, either), a mystically obscure sleeve, and a remarkable range of tunes, Led Zeppelin IV, is still, for many, the best example of the group’s craft. Robert Plant thinks so himself. He has been quoted saying, simply: “the Fourth Album, that’s it.”

Through the years i regulary take out the vinyl editions of these albums and give them a swirl, but Led Zeppelin IV is, for me the definitive  Z album. It brings me back to a more innocent time in Castlebar, an innocent time when there were no smartphones, no Facebook, just people caught in the moment and most importantly having a good time,