Neil Young has always  remained an independent songwriter. Like Springsteen he always seems to find his way to support the average Joe Soap. When Neil Young performed on stage just recently in Nowlan Park in Kilkenny with Bob Dylan i think it was clear  who won the battle of the two titans on this particular occasion.

I have being a big fan of  Neil Young  from day one. Well, when I say day one, I mean since the first moment I listened to him.  I guess a lot of this influence came from spending Sunday nights listening to Frank and Noel perform many of his hits in The Humbert Inn in Castlebar in the late nineties,  grasping on to my life and  to my pint bottle of Bulmers cider and hearing Fr. John Connaughton say twelve thirty mass on a Sunday afternoon. 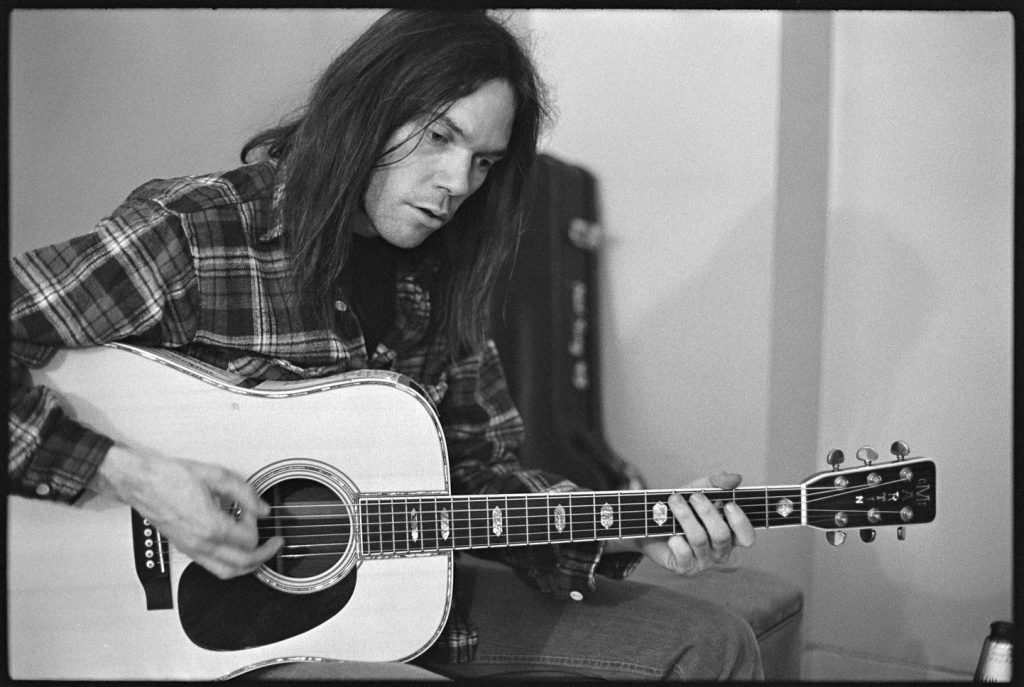 Neil Young pictured during a shoot to promote his album “Harvest”

Neil Young is a rebel amongst many, he is an interesting character,  the type of character  that you would like to sit at bar with and shoot the breeze. Politically he is a very informed person.

But other than all this he is one the greatest songwriters that has ever performed in a front of live audience.

For example check out his memorable acoustic performance for MTV unplugged all those years ago.

He was born on November 12th 1945, just three years older than my father. He  he had released two solo album before joined forces with Crosby, Stills, Nash in 1969.

I didnt fall in love or nether appreciate  Young’s music properly until my late teens, up until that point i had figured that he was just another “crooner” trying to make his way in the world. But I never really listened to his music until my late teens. But when I did, I was hooked!!

If you ever get a chance, check out Young’s autobiography titled “Waging Heavy Peace”.

In a chapter of the book Young tells us about his love cars, especially Cadillac cars. He tell us that he would often name his cars after certain songwriters. One which was called “Hank Williams”, baby blue with tan top seats.

Its an interesting book that also very honest. There is a great little documentary from VH1 legends about the iconic group which we have featured below.

Shortly after the release of Everybody Knows This Is Nowhere, Young reunited with Stephen Stills by joining Crosby, Stills & Nash, who had already released one album Crosby, Stills & Nash as a trio in May 1969. Young was originally offered a position as a sideman, but agreed to join only if he received full membership, and the group – winners of the 1969 “Best New Artist” Grammy Award was renamed Crosby, Stills Nash & Young.

The quartet debuted in Chicago. on August 16, 1969, and later performed at the famous Woodstock Festival, during which Young skipped the majority of the acoustic set and refused to be filmed during the electric set, even telling the cameramen: “One of you fuckin’ guys comes near me and I’m gonna fuckin’ hit you with my guitar”. During the making of their first album, Deja Vu (March 11, 1970), the musicians frequently argued, particularly Young and Stills, who both fought for control.

Stills continued throughout their lifelong relationship to criticise Young, saying that he “wanted to play folk music in a rock band.”  Despite the tension, Young’s tenure with CSN&Y coincided with the band’s most creative and successful period, and greatly contributed to his subsequent success as a solo artist.

On August 30th 1970 Young went on to release one of his greatest studio albums “After The Goldrush”. The album also feature Springsteen guitatist Nils Lofgren amongst many others.

Young’s bitter condemnation of racism in the heavy blues-rock song “Southern Man” (along with a later song entitled “Alabama”) was also controversial with southerners in an era of desegregation, prompting Lynard Skynard to decry Young by name in the lyrics to their hit “Sweet Home Alabama.”

However, Young said he was a fan of Skynyrd’s music, and the band’s front man Ronnie Van Zant was later photographed wearing a Tonight’s the Night T-shirt on the cover of an album.

Young recorded another album, On the Beach  (July 16, 1974), which presented a more melodic, acoustic sound at times, including a recording of the older song “See the Sky About to Rain”, but dealt with similarly dark themes such as the collapse of 1960s folk ideals, the downside of success and the underbelly of the Californian lifestyle.

Like Time Fades Away, it sold poorly but eventually became a critical favourite, presenting some of Young’s most original work. A review of the 2003 re-release on CD of On the Beach described the music as “mesmerising, harrowing, lucid, and bleary.

In 1976, Young performed with Bob Dylan, Joni Mitchell, and numerous other rock musicians in the high-profile all-star concert The Last Waltz, the final performance by The Band. The release of Martin Scorsese’s movie of the concert was delayed while Scorsese unwillingly re-edited it to obscure the lump of cocaine that was clearly visible hanging from Young’s nose during his performance of “Helpless”. Check out the video for this below where if you look close enough you can see traces of cocaine up Young’s nose!!

Young set out in 1978 on the lengthy “Rust Never Sleeps” tour, in which he played a wealth of new material. Each concert was divided into a solo acoustic set and an electric set with Crazy Horse. The electric sets, featuring an aggressive style of playing, were later seen as a response to punk rock.

Two new songs, the acoustic “My My, Hey Hey (Out of The Blue)” and electric “Hey Hey, My My (Into The Black) ” were the centerpiece of the new material.

Their lyrics have been among Young’s most widely quoted

The album has also widely been considered a precursor of grunge music and many grunge artists have said they were inspired by Young’s distorted guitars on the B side to this album. Young also compared the rise of Johnny Rotten with that of the recently deceased “King” Elvis Presley, who himself had once been disparaged as a dangerous influence only to later become an icon. Rotten returned the favour by playing one of Young’s songs, “Revolution Blues” from On the Beach  on a London radio show, an early sign of Young’s eventual embrace by a number of punk-influenced alternative musicians.

I have always found Neil Young to be a very interesting character, a great story teller that captivates us all, wheather it be in a massive arena or in a tiny small room he always has something to say.

And as Neil always says, Keep on Rockin in the Free World,