I grew up with Nick Cave, okay I don’t know him but every time I listen to his music it feels like I’m meeting an old friend that I haven’t seen in a very long time.

Nick Cave & The Bad Seeds was founded in 1983 after the Birthday Party, a band that Cave had with multi-instrumentalist Mick Harvey, broke up.

Initially, the musical genre tackled by the band was post-punk, but it gradually shifted toward experimental alternative rock; however, many of their albums incorporated diverse influences. 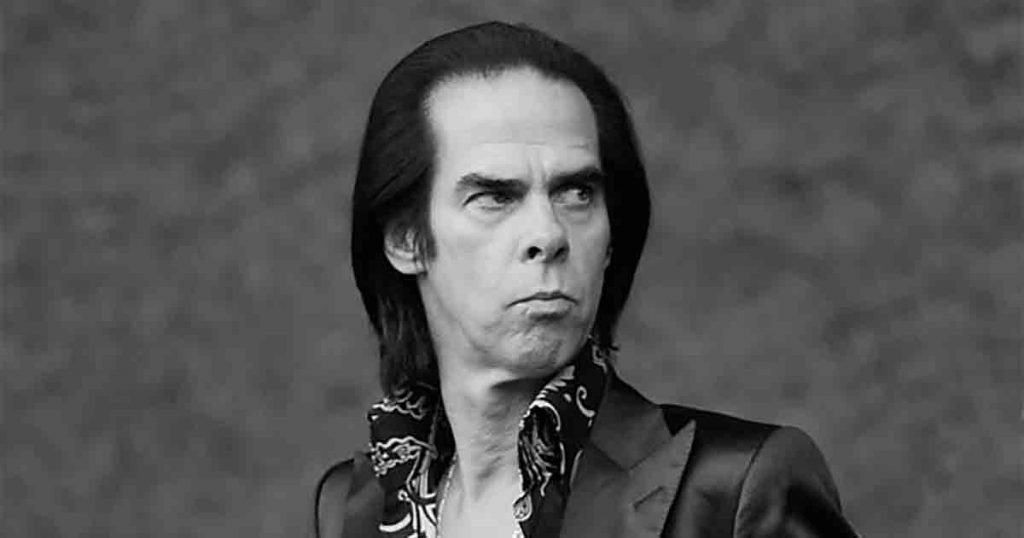 Nicholas Edward Cave was born in Warracknabeal, Australia on 22/09/1957. His mother’s name is Dawn, a librarian; his father Colin was an English teacher. He has two older brothers, Tim (1952) and Peter (1954) and a sister, Julie (1959). He was raised an Anglican, which explains the apparent influence of The Bible in his work..

His education: Caulfield Grammar School, Melbourne and an Art School (Art department of Caulfield Institute of Technology, now Monash University) which he attended only two years. An example of Nick’s art is on the back of the Birthday Party’s “Prayers On Fire” album, signed “Nicholas Cave”. At Caulfield Nick met Mick Harvey, with whom he founded a high-school band that would become The Boys Next Door. The first recording released by Nick was “These Boots Are Made For Walking” in 1978, a single that was soon followed by the album “Door Door” the next year. The band consisted of Nick, Mick Harvey, Tracy Pew, Phillip Calvert and Rowland S. Howard (from 1979 on).

The Birthday Party had a huge impact on the British rock scene of that time, especially because of the expression of “raw emotion, wit and essential dumbness” (Mute Records’ opinion) in their music, though it took some time for them to really break through. The LP “Prayers on Fire” was released in 1981, “Junkyard” in 1982. The band moved to West-Berlin and fell apart in 1983 after releasing 3 studio albums and 2 EP’s. Their last EP, “Mutiny”, was the ultimate manifestation of the extremity of The Birthday Party’s art.

Following the group’s breakup in 1983, Cave briefly sojourned in Los Angeles, writing a film script that would later manifest itself as the prison movie Ghosts … Of The Civil Dead, made with director John Hillcoat and director Evan English. He also assembled the first incarnation of The Bad Seeds. Mick Harvey remained from Birthday Party days. Blixa Bargeld, of Einsturzende Neubauten infamy, had appeared as guest guitarist on The Birthday Party track “Mutiny In Heaven,” from their final Mutiny EP. Barry Adamson, who had guested on “Kiss Me Black” from The Birthday Party’s seminal Junkyard LP, came from revered Manchester post-punks Magazine. Joined by Anita Lane, Edward Clayton Jones and Hugo Race, they released From Her To Eternity in 1984. This fusion of diverse talent was, if anything, more resourceful in constructing vivid musical backdrops to Cave’s song narratives.

Relocated in Berlin, Cave started work on what was to become his debut novel, And The Ass Saw The Angel. The themes he was evoking in this work would fire the next Bad Seeds album, 1985’s “The First Born Is Dead”, in which Cave, Harvey, Bargeld and Adamson explored the myth-heavy terrain of Delta blues. The epic single “Tupelo,” based on John Lee Hooker’s song of the same name, encapsulated Cave’s Biblical fixation in one go, blending the birth of the King with Old Testament mythology. Recruiting Die Haut’s Thomas Wydler as drummer, the 1986 incarnation of The Bad Seeds selected a poignant set of covers for the “Kicking Against The Pricks” album, including Tim Rose’s “Hey Joe,” Velvet Underground’s “All Tomorrow’s Parties” and the definitive rework of Gene Pitney’s “Something’s Gotten Hold Of My Heart.” They swiftly followed this collection with the “Your Funeral..My Trial” LP. By this time, Barry Adamson had left the band, replaced by ex-Cramps/Gun Club man, Kid Congo Powers, while the lineup expanded with Roland Wolf on keyboards.

This incarnation delivered 1988’s “Tender Prey”, with its condenmed-man drama “The Mercy Seat” the most outstanding single. That year also saw the publication of Cave’s book, “King Ink”, a collection of lyrics and plays, and the band appeared in Wim Wender’s film “Wings Of Desire”, performing “The Carny” and “From Her To Eternity.” “Ghosts … Of The Civil Dead”, with a score composed by Cave, Bargeld and Harvey and a central acting performance by Cave, gained its theatrical release, and the singer’s film work took on another dimension when he appeared as rock star Freak Storm in Tom DiCillo’s Johnny Suede. After this, Cave moved from Berlin to Sao Paolo, Brazil, where he had met Viviane Carneiro during a tour. The influence of Brazil is apparent in “The Good Son”, the album released in 1990. The music is much more melodious and friendly than on any other album released before and is often said to express the Brazilian feeling of “saudade”. Kid Congo Powers (Cramps, Gun Club) made his appearance as a member of the Bad Seeds on this album, although he already played in the band for a longer period, during the YFMT and KAtP times. In 1989, a film called “Ghosts… of the Civil Dead” was released, co-written by Nick, the soundtrack of which was written by Nick, acted in by Nick. It is a prison movie.

Not until 1992, the seventh album was released: “Henry’s Dream”, followed by a worldwide tour. Again, the line-up was changed: Nick, Blixa, Mick, Thomas, Martyn P. Casey and Conway Savage. The tour was used to record their only official live CD to be released in 1993: “Live Seeds”. The CD was intended as a celebration of the ten years’ existence of The Bad Seeds and is sold together with a photobook by Peter Milne. The book contains photographs from the 1992/3 tour.

The Bad Seeds’ creativity continued to soar to ever-heightening peaks over their next three releases. 1994’s imaginative feast, “Let Love In”, was produced by Tony Cohen, whose association with Cave dates back to The Birthday Party days.

With Cave now based in London, The Bad Seeds’ impetus continued apace. 1996’s “Murder Ballads” was a culmination of Cave’s longtime fascination with “the language of violence” and allowed for further bold experimentation in musical style. Collaborations with Kylie Minogue and PJ Harvey on the singles “Where The Wild Roses Grow” and “Henry Lee,” respectively, led to mainstream chart success and The Bad Seeds widest exposure ever. This album also saw the addition of two new Bad Seeds: Warren Ellis, of Melbourne’s The Dirty Three, added vibrant violin, and New York NoWave troubleshooter Jim Sclavunos pitched in atmospheric percussion.

Apart from this, Nick Cave features on the compilation Album “Songs In The Key Of X”, which has songs on it from the TV serial “The X-Files”. Nick does “Red Right Hand” and can be found on a “Hidden Track” called “Time Jesum transeuntem et non reverendum” (Dread the passage of Jesus for he will not return) with The Dirty Three.

Meanwhile, Cave, Harvey and Bargeld resumed their cinematic links with John Hillcoat, scoring his second feature film, 1996’s To Have And To Hold. Cave’s second anthology of lyrics and essays, King Ink II, was also published that year.Nick Cave was shortlisted for “Best Male Artist” of 1996 by MTV Music Awards. He declined the honour, stating that he did not want to compete with other people where Art was concerned.”Thank you but no…no thank you”.

March 1997 saw the release of The Bad Seeds’ tenth studio album, The Boatman’s Call. Cave’s most intensely personal work to date, the music was pared down to a beautiful simplicity, evoking magical atmospheres, while the singer explored the themes of love, faith and loss in unflinching detail. Just as Murder Ballads piled on the visceral details with evident glee, so The Boatman’s Call stripped away all the veils of pretense to the bone of the emotions it evoked. The contrast between the two albums says much about Cave and The Bad Seeds’ continual quest for excellence and illumination, as well as displaying all the versatility of the most singular ensemble in contemporary music.

In 1998, the album “The Best of Nick Cave and the Bad Seeds” was released, as well as a video compilation of several songs. The album contains selected songs, mainly chosen by Mick Harvey, but the other Bad Seeds contributed as well. Initial copies of the album contain a bonus-disc with live tracks from the concerts in Royal Albert Hall, 1997.

During 1999, Nick Cave performed without The Bad Seeds, usually with Warren Ellis and somethimes with Dirty Three.”And The Ass Saw The Angel – Readings and Music” was rereleased.That’s a Nick Cave 1988 readings acompanied by Mick, plus the music Mick Harvey and Ed Clayton-Jones recorded for a theatrical adaptation of the book from October 1993.Meanwhile he get married with Susie

Nick Caves most recent album with the bad seeds has being hailed as a major success, go check it out