Well we know where were goin but we don’t know where we been…Ah yes indeedy, My very first teenage disco in the townhall in Castlebar i heard vocalist David Byrne say the opening lyrics to one of TALKING HEADS best known tracks “Road To Nowhere” and wam bam thank you mam i was hooked right there and then! 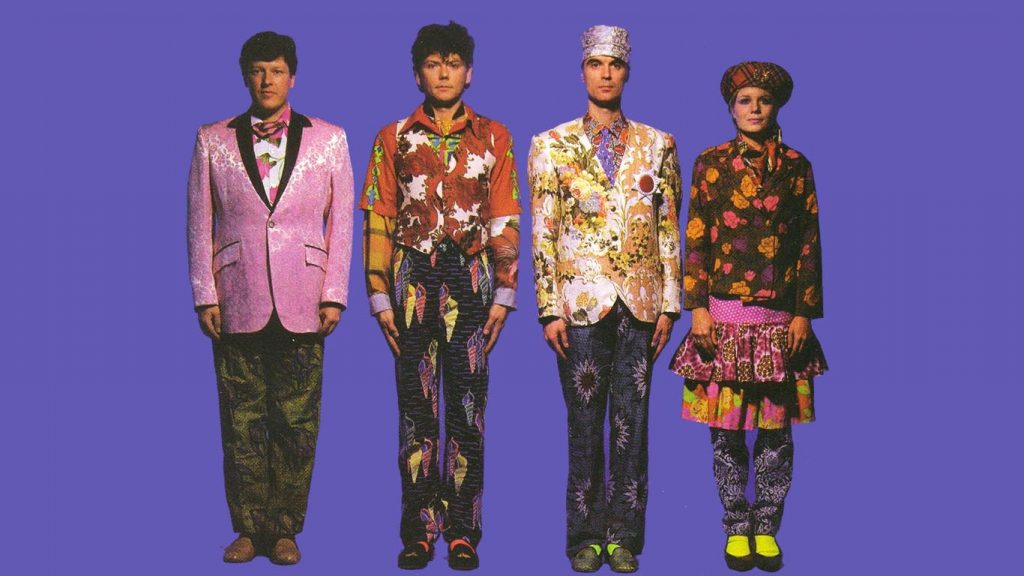 Talking Heads fused Disco, Funk, Jazz and Soul all in one.

Growing up in the nineties in Castlebar it was kind of “uncool” to have a form of appreciation for the band, to a lot of my older generation at the time who were lets say eighteen or nineteen the band were seen as an eighties washed up music act. The first time i heard Talking Heads i was twelve years old.

And although the band had long broken up before i had heard the band’s most popular radio friendly track. I thought they were really cool! I still think they are really cool.

What i have decided to do today is to take my favourite track from each album released by the band, and when i went looking online, i discovered some really good live gems when i went searching through Youtube. I also want to discuss a bit about the band’s history, from when they were formed to the band’s break up in 1991.

So is David Byrne, a man with a fierce wealth of knowledge for music and how it works! Does anyone out there remember his incredible book titled “How Music Works” from 2012?

I refer to the book a lot when i am booking acts for venues these days and i have learnt a lot from it over the past eight years. I would also recommend the book to any young artist, band or promoter as it has wonderful insight into the music business and how it works. Great book!, An incredible wealth of knowledge and pages filled with information on the music scene.

Lets go back all the way to 1974 when the band were formed in The New York area. They were born out of what was called back then “New Wave”

Talking Heads were an awesome band that defied the boundaries of Rock music.

Former art school students who became involved in the 1970s New York punk scene, Talking Heads released their debut album, Talking Heads: 77, to positive reviews in 1977[10]. They collaborated with producer Brian Eno on a trio of experimental and critically acclaimed releases: More Songs About Buildings and Food (1978), Fear of Music (1979), and Remain in Light (1980).

After a hiatus, Talking Heads hit their commercial peak in 1983 with the U.S.
Top 10 hit “Burning Down the House” and released the concert film Stop Making Sense, directed by Jonathan Demme. They released several more albums, including their best-selling LP Little Creatures (1985), before disbanding in 1991

They fused so much funk into their music that they cannot be considered simply a Rock band. David Byrne is a maverick and a real champion of World music and exploring influences from around the world. This is reflected in their music. They have done so many quality albums from ‘Fear of Music’, ‘Remain in Light’, ‘Speaking in Tongues’ etc, countless memorable singles like ‘Once in a Lifetime’, ‘Slippery People’, ‘This Must Be The Place (Naive Melody)’, ‘Blind’, ‘Lifetime Piling Up’, ‘Psycho Killer’, ‘Burning Down the House’…. The list goes on and on.

A really innovative rock group that you can dance to – they were always played in all the cool pre-house dance clubs in New York. The funkiest Rock band ever hell they were so funky you would think they were black!
In a later interview, Weymouth recalled how the group chose the name Talking Heads: “A friend had found the name in the TV Guide, which explained the term used by TV studios to describe a head-and-shoulder shot of a person talking as ‘all content, no action’. It fit. Later that year, the trio recorded a series of demos for CBS, but the band was not signed to the label. The band quickly drew a following and were signed to Sire Records in November 1976.

After releasing four albums in barely four years, the group went into hiatus, and nearly three years passed before their next release, although Frantz and Weymouth continued to record with the Tom Tom Club. In the meantime, Talking Heads released a live album The Name of This Band Is Talking Heads, toured the United States and Europe as an eight-piece group, and parted ways with Eno,who went on to produce albums with U2.Three more albums followed, 1985’s Little Creatures (which featured the hit singles “And She Was” and “Road to Nowhere”), 1986’s True Stories (Talking Heads covering all the soundtrack songs of Byrne’s musical comedy film, in which the band also appeared),and 1988’s Naked.

Little Creatures offered a much more American pop-rock sound as opposed to previous efforts. Similar in genre, True Stories hatched one of the group’s most successful hits, “Wild Wild Life”, and the accordion-driven track “Radio Head”, which became the etymon of the band of the same name.

Naked explored politics, sex, and death, and showed heavy African influence with poly rhythmic styles like those seen on Remain in Light.
During that time, the group was falling increasingly under David Byrne’s control and, after Naked, the band went on “hiatus”.

It took until December 1991 for an official announcement to be made that Talking Heads had broken up.

Despite David Byrne’s lack of interest in another album, Tina Weymouth, Chris Frantz, and Jerry Harrison reunited for a one-off album called No Talking, Just Head under the name The Heads in 1996

The band reformed for a one off show in 2002 but that was the end of the road for the band with Byrne and other members of the group declining to reform ever since. David Byrne himself has gone on to have a very successful solo career.

Talking Heads, one of the most celebrated bands of the 1970s and 1980s, by their breakup “had recorded everything from art-funk to poly-rhythmic world-beat explorations and simple, melodic guitar pop”. Talking Heads’ art pop innovations have had a long-lasting impact.

Along with other groups such as Devo, Ramones and Blondie, they helped define the new wave genre in the United States. Meanwhile, the more worldly popularises like 1980’s Remain in Light helped bring African rock to the western world.

For me Talking Heads were a massive influence on me growing up around Castlebar, they just had it! They were an amazing live band, that would often fuse, Jazz, Disco, pop and Rock all in one and they are still just as important today as they were all those years ago.