Castlebar always has been and always will be a great town for original music and original ideas. From the big “O” Roy Orbison gracing the stage at the TF “Ballroom” in 1963 to the “Occasion at The Castle” and the popular Blues Festival in the 90’s and Naughties you could almost always find something to do when it came to live music in the town. The following is a very short and small piece covering some of the events that has taken place in Castlebar over the years that some folks may not be aware of. In the future we would like to do a lot more digging on the history of the Castlebar music scene. We will speak to the people who were actually there, their experiences and their stories, piece these stories together, unravel the cube and make sure that these stories are never forgotten. 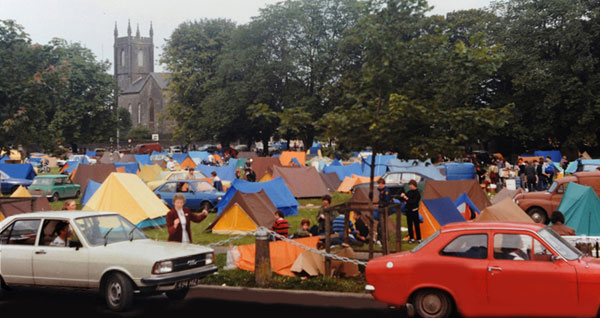 Tents pitched on the Mall in Castlebar for “The Occasion at The Castle” 1982, thanks to Castlebar.ie for the photo. Photographer unknown

The proposal for “The Occasion at The Castle” was the brainchild of brothers Tommy and John Staunton and local hotelier Tony McHugh. The substantial sum of £120,000 was invested in the festival with half going toward enticing major acts to play over the August bank holiday weekend. At the time the community was cautious of letting such an event take place in the area but at the same time also knew it would be a great investment in the town. The festival ran for two years but was shelved after 1982 due to trouble from bikers in the area. Legend has it that a well known member of the Catholic church in Castlebar was very unhappy about the events taking place in the 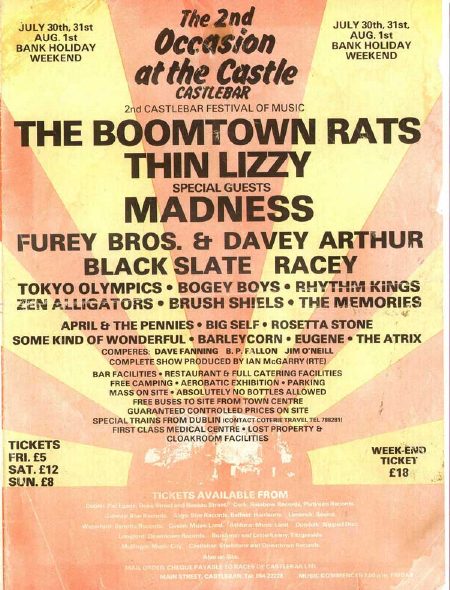 The Boomtown Rats, Thin Lizzy and Madness headlined in 1982.

From live events that has seen the likes of The Prodigy (thanks to Kevin “Webster” MacNeely) come to Castlebar in the 90’s , Status Quo, Meat Loaf to host but a few back when the TF was known as The Travellers Friend Hotel.

We ourselves are proud to have had some hand over the past few years bringing some of the best live Irish acts to the area.
One of our most favourite shows and accomplishments over the years was when we brought THERAPY? to Castlebar. 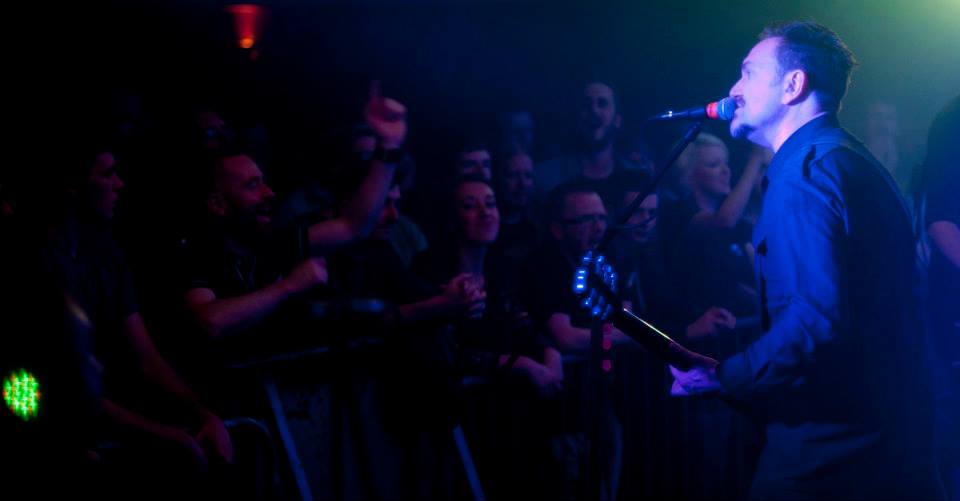 Andy Cairns of Rock giants Therapy? when they came to Castlebar at The Ruby Room in The TF Hotel October 2013 , Photo: Michael Quinn

In 2011 we set up a Facebook page titled “Lets Get Therapy? to Castlebar”, i spent a number of years trying to persuade getting the band to come up to Castlebar, emails upon emails were sent, discussions were had and the timing never felt right for both parties. But eventually in February 2013 we got the call that Therapy? were going out on tour on the rest, as you know is history.

As a town sometimes we need to take a step back for a moment and see what Castlebar has achieved through the years. The list of names are endless, we could possibly keep on writing this small piece until the cows come home! We have had Hozier, Snow Patrol, Thin Lizzy, Meat Loaf, The Prodigy and loads more to add to that list. And Garbo’s on Moneen and most recently Bridge Street on the main street in Castlebar.

Castlebar has seen its fair share of historical gigs take place, something that we should really be proud of, i look forward to speaking to these people that made some of these events happen in Castlebar, learning from them and putting together some missing pieces in the future.