Sometimes it is essential to separate the technique and artistry of a film from the message it ultimately presents. Sometimes it’s easy – it’s impossible to watch Triumph of the Will as anything other than Nazi propaganda. Sometimes, as with Gone With the Wind’s Confederate apologia, it earns a film the tag of “problematic classic.” And sometimes, a film gets an inexplicable pass, like Buster Keaton going full-blown Johnny Reb in The General in 1926. So when Martin Scorsese, an undeniable master of the form, decides it’s time for another pass at midcentury mob history, of course it’s going to be well-made. The question is, to what end? 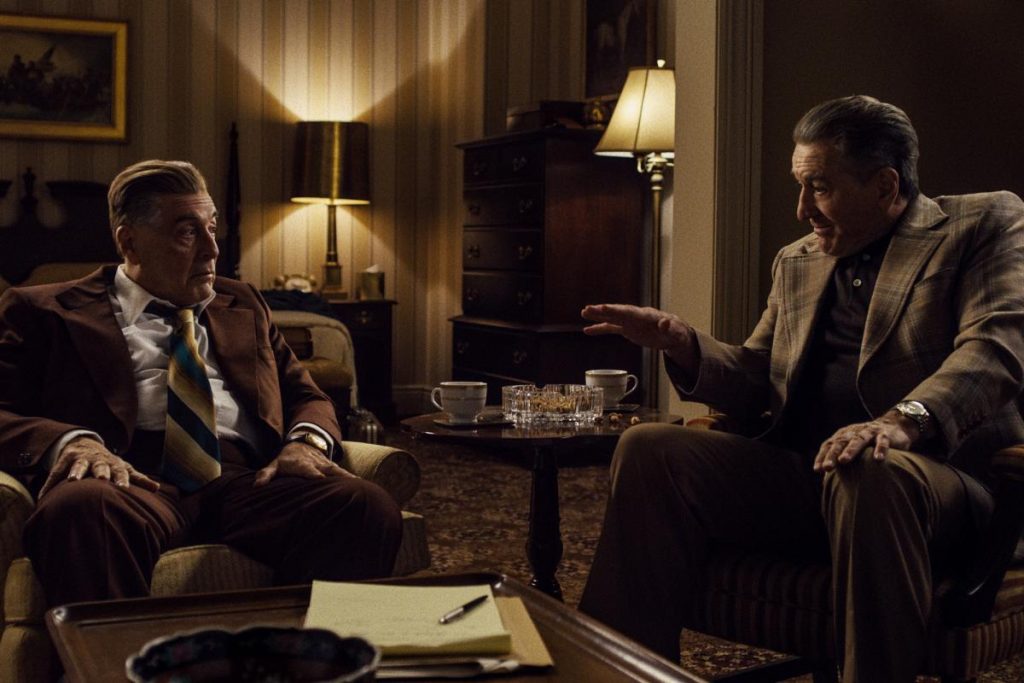 This is Scorsese trying to wade into James Ellroy territory – most especially the mob vs. Kennedy vs. Cuba vs. the Teamsters dynamic of the Underworld U.S.A. Trilogy. Yet where Ellroy openly fictionalizes, inserting made-up characters into real-life events, Scorsese directly adapts I Heard You Paint Houses, attorney Charles Brandt’s recounting of the life of Frank “The Irishman” Sheeran, a Teamster boss and mob goon who claimed to have killed Jimmy Hoffa

Suitably, it’s framed as the reminiscences of a crippled old man. Sheeran, as initially depicted by De Niro under a layer of makeup, is stuck in a retirement home, alienated from his family and telling his stories of his mob glories to an unseen audience. His narration flips back to a digitally de-aged cast – Pesci as Philly crime boss Russell Bufalino, Romano as his mob attorney cousin Bill Bufalino, Keitel (briefly) as “the Gentle Don” Angelo Bruno, and Pacino as Sheeran’s future friend and target, Teamsters Union President Jimmy Hoffa. The story now enters a second frame, as Russell and loyal lieutenant Sheeran head to a wedding in Detroit. The date is July 30, 1975, and that’s the last day that Hoffa was seen alive, in Bloomfield Township at a meeting with the mob. Within this frame-within-the-frame, Sheeran recounts how he went from trucker to mob enforcer to Hoffa’s bodyguard, and finally the union boss’ executioner.

The meat here is in Sheeran’s personal experience as intermediary in Hoffa’s complicated dealings with the Mafia. Pacino seemingly decided not to cross paths with Jack Nicholson’s near-perfect re-creation of Hoffa in Danny DeVito’s 1992 eponymous biopic, instead reducing the convoluted figure into a series of loud tics and bad choices. Much of the extended run time is De Niro trying to rein in the maverick union chief before some slight offends the mob, for whom he has become de facto chief banker by making loans from the union pension fund.

Scorsese remains Calogero in A Bronx Tale, the wide-eyed boy a little in awe of the neighborhood toughs. He lacks Ellroy’s willingness to make his characters fascinating and unsympathetic at the same time. As always, his mobsters are violent but still honorable. Protection rackets work. Sheeran is just a working stiff whose job happens to be murdering people. It doesn’t help the question of veracity that a large slab of his stories have been debunked, or contradicted by his own recollections.

The Irishman is a summation of Scorsese’s ongoing obsessions. Of course Sheeran sits alongside Jimmy the Gent in Goodfellas and Casino’s Ace Rothstein as the Mafia insider-outsider; but there’s also the question of the unreliable narrator, as in the too-cute-for-its-own-good Rolling Thunder Revue, and the old-man Catholicism of Silence. Yet most especially The Irishman fits into the American Mafia cinematic tradition that these are somehow tragic figures, and good family men. The older Mafiosi all have an obsession with being the favorite uncle to Sheeran’s oldest daughter, Peggy, and seem most peeved that she’s fondest of Hoffa. Played as a child by Gallina, and not really given any lines until she ages into Paquin, she’s the closest any woman here comes to being allowed a rounded performance. Whether that’s Scorsese using his unreliable narrator’s own misogyny against him, or he just doesn’t see the need for women in the plot, is hard to tell.

While not lionizing them, Scorsese still romanticizes mobsters as flawed yet still glamorous, undone by their own hubris. Compare that to how they are portrayed in the Italian poliziotteschi, the gang films made during the infamous and bloody Years of Lead – movies in which they are portrayed as boors, bullies, and murderers, rather than genteel gentlemen who must occasionally get their hands dirty and do so oh-so-begrudgingly. That Scorsese expects the audience to feel Sheeran’s angst as he gets flown to kill his supposed friend is a demand too far.

Denying Scorsese’s raw talent and experience as a filmmaker would be insanity – although the decision to digitally de-age his actors proves the technology is still spotty, and works best in long shots. But that the only major film made in America this year about unions dredges up Hoffa again, and the Italian American community is yet again made synonymous with organized crime, seems tone deaf and self-indulgent.