One thing about living in Castlebar that I never could stomach, All the damn Vampires.

Running up to Gavin’s video store on the mall in Castlebar on Friday nights to pick out our favorite top shelf horror movies in the late eighties and early nineties when I was a kid was a very big deal for me, my sister and my brother when we were kids.

We used to have a Betamax player before everyone else did on the drive before the VHS format made an appearance. So all the neighbors would call around and watch movies at our house!!

I used to love looking at all the top shelf horror videos, but of course we always needed a parent with us to rent out the movie.

The eighties was a great era for horror, in fact as far back as I can remember it was probably one of the best eras for camp horror movies, some of the best horror films were also produced in the eighties,  for example, A Nightmare on Elm Street, Friday The 13th, Hellraiser to name but a few.

But it was also a great decade for vampire films, Fright Night, Vampire in Brooklyn and our favourite The Lost Boys.

The Lost Boys could have being set in Castlebar, well that is exactly what I imagined as kid in the late eighties. The film had some really memorable one liners that myself and my sister would constantly quote when we were growing up in Castlebar. 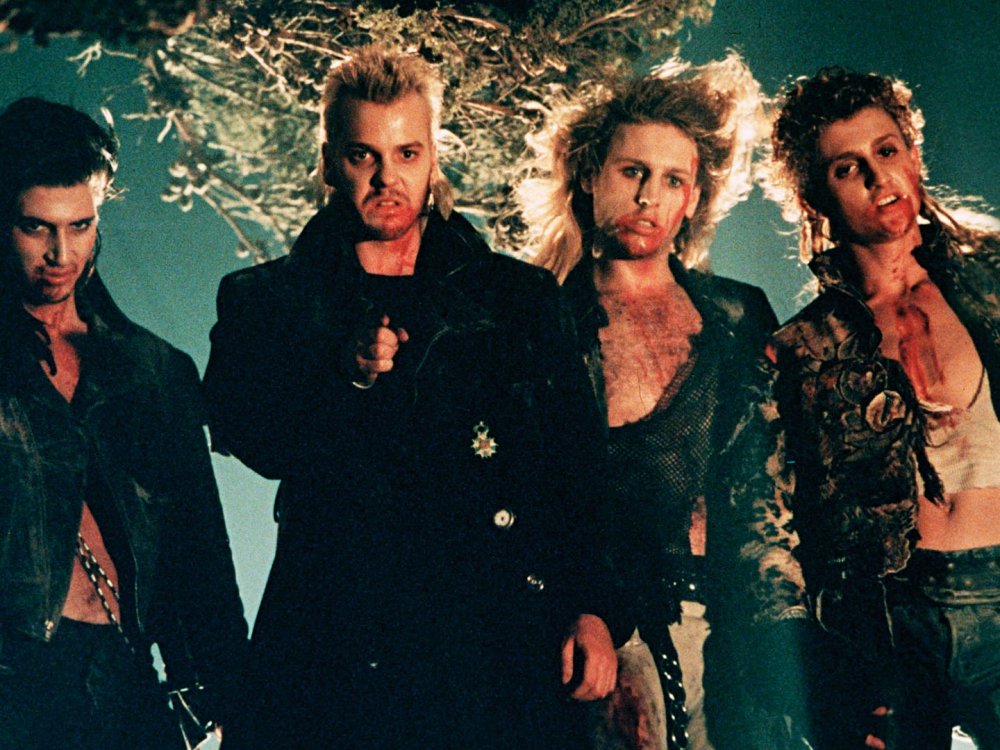 The Lost Boys came out far too early to be considered satirical, however during a contempary  viewing its cynical tone cant be missed

The Lost Boy’s theme of dead things walking is more apt than anyone could have predicted. At the time a gallery teenage pin-ups that included the late great Corey Haim and Corey Haim and promising other talent. Although now the film has become a showcase to a certain degree for prematurely deceased careers except maybe for Kiefer Sutherland who went on to star in the hit TV series 24.

The story tells the tale of two boys who move into an area populated by bikers and plagued by a series of bizzare deaths. Whilst shirking off rumours about vampires, the older brother Mike played by Stephen Patric begins to show signs of vampirism, so younger brother Sam played by Corey Haim enlists the help of two vampire hunters called The Frog Brothers. 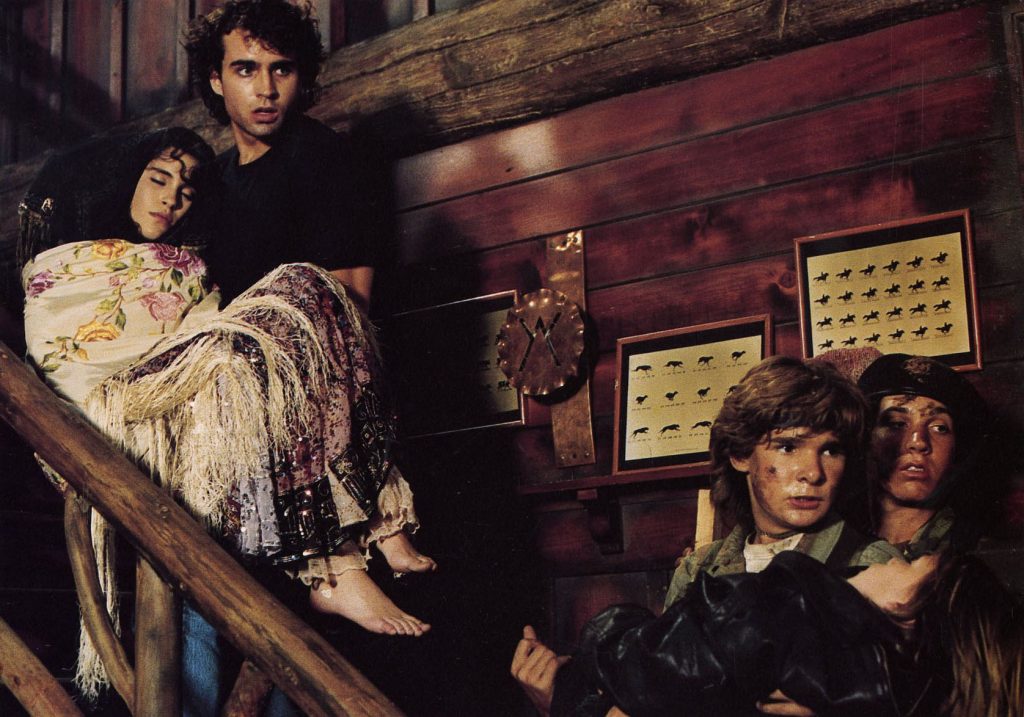 Shot on location in the coastal California town of Santa Cruz and directed by Joel Schumacher, The Lost Boys became a pop culture phenonmenon thanks to its attractive young stars, offbeat soundtrack and hip, clever marketing campaign. The Film’s tagline “Sleep all day, Party all night, Never grow old, Never die, Its fun to be a vampire” perfectly captured its knowing mixture of attitude and gore. The effects team who transformed Sutherland and company into snarling bloodsuckers would go on to provide equally gruesome effects for the likes of Blade, another revisionist vampire flick more than a decade later.

The Movie got a great response upon its release and even the legendary critic Roger Ebert gave the movie two and a half out four stars praising the the cinematography and a cast that’s good right down the line, but ultimately describing Lost Boys as a triumph of style over substance and an ambitious entertainment that starts out well but ends up selling its soul. All of this was “almost” a thumbs up for the movie.

Here he is a little knowledge about the movie that you may not know, originally Kiefer Sutherland’s Kiefer character, David was impales on antlers but does not explode or dissolve as do the other vampires. He was intended to have survived which would have picked in the sequel.

The Lost Boys is one of the greatest vampire flicks of all time and if you have not yet watched it well then do so. 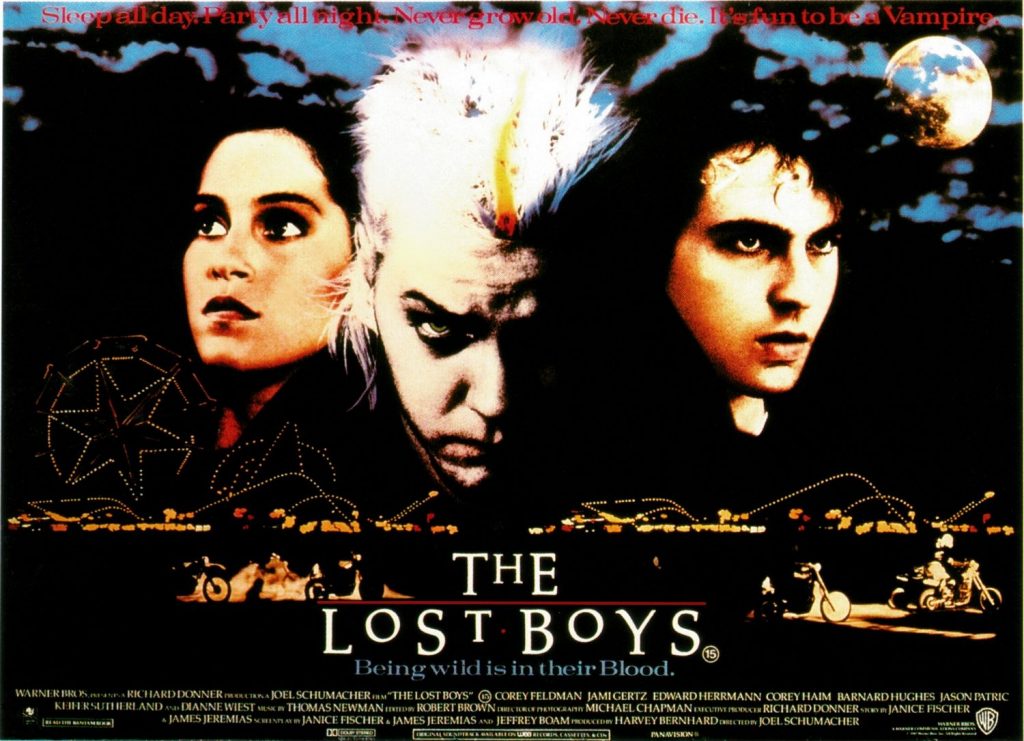