I had just reached second year in St Gerald’s College in Castlebar when my good friend Cian McGarrigle handed me a cassette tape of a little unknown band called the Smashing Pumpkins, the album was called “Siamese Dream”.

If I recall Cian was always a great influence on me when it came to great music in Castlebar.  Cian had gone to the trouble of writing the name of  each track out and luckily I still have the very same cassette tape  in my vault at home.

At the time Siamese Dream had just been released and I had just heard “Disarm” for the first time.

Immediately, not only the band’s name captivated my mind but also the songs that came with the package.

Yes it was dark, and of course, at times slightly depressing, but I fell in love with it all the same and wanted to hear more, lots more. 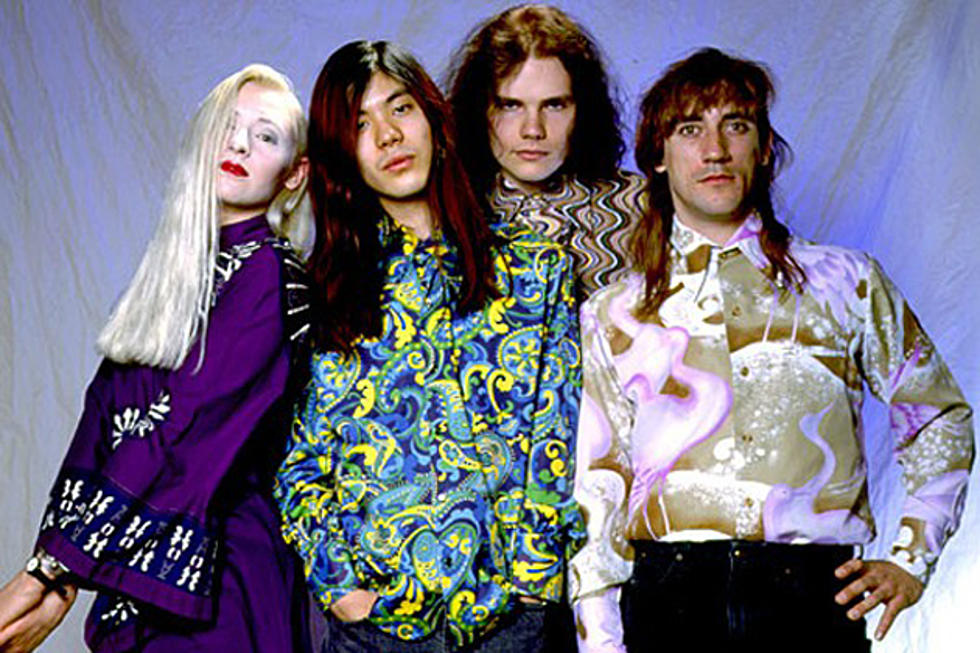 Gotta love that style!!Most definitely the early days of the Smashing Pumpkins, pictured here in 1991

Smashing Pumpkins formed in 1988 but it was not until after the band’s debut record “Gish” and then Siamese Dream that followed when I felt I had to listen to the record and learn about this band that had the title “Pumpkins” in their band name.

Arriving several months before Nirvana’s Nevermind, the Smashing Pumpkins debut album, Gish, which was also produced by Butch Big was the first shot of the alternative revolution that transformed the rock & roll landscape of the ’90s. While Nirvana was a punk band, the Smashing Pumpkins and guitarist/vocalist Billy Corgan are arena rockers, co-opting their metallic riffs and epic art-rock song structures with self-absorbed lyrical confessions.

Like Brain May and Jimmy Page, he knows how to layer guitars for maximum effect, whether it’s on the pounding, the sub-Sabbath rush of “I Am One” or the shimmering, psychedelic dream pop surfaces of “Rhinoceros.”

Such musical moments like these, as well as the rushing “Siva” and the folky “Daydream,” which features D’arcy  on lead vocals, demonstrate the Smashing Pumpkins potential, but the rest of Gish falls prey to undistinguished songwriting and showy instrumentation.

In contrast to Gish’s steady flow, Siamese Dream crashes out of the gate. “Cherub Rock” remains an absolutely stellar opener with a sense of pure sonic melodrama, thanks to Chamberlin’s circus-act drum introduction, a tight clip of guitars quickly matched by equally nimble bass, a volcanic blast of a guitar lead, and then a shift to a woozy, still-building sprawl.

And all this before the first verse even starts. Throw in everything that followed– the overt MBV worship of “Hummer”, the country-rock-tinged wanderlust of “Mayonaise”, “Soma”‘s update of Prince’s “The Beautiful Ones” for a new decade, and inevitably the MTV/radio hits “Today” ,”Disarm” “Today” and “Rocket”  and no matter your take on its mastermind or his divisive whining/sighing vocals, it’s an embarrassment of musical riches.

Cherub Rock has only just settled into silence before Quiet begins its bludgeoning of the listener’s senses. It features a moment where Corgan seems to call out his grunge-era peers-cum-rivals – “We are the fossils / the relics of our time” – before lyrically turning his back on what’s been for future painted gold.

Not before a moment’s pause, mind – it’s the most-tender tracks on Siamese Dream that have endured better than the blitzes that surround them, and Today is the best song Corgan has ever written.

The only song that comes close in the Pumpkins catalogue is 1979, from 1995’s sprawling double-album Mellon Collie and the Infinite Sadness.

(Oh, go on: I’ll give you Tonight, Tonight from the same album, too.) There is such purity to the line “today is the greatest day I’ve ever known” that it will never age. However much Corgan continues to pour misery on Pumpkins fans with his persistent misadventures matters not a jot when he’s got this in his back pocket, ready to roll out at any show and have all in attendance forgiving everything, if only for three glorious minutes. Nutshell: Today is one of the greatest songs of all time.

There are further highs to be found on Siamese Dream – the soaring-and-screeching Mayonnaise was a big favourite of mine back when, and Rocket and Disarm are memorable singles, the latter a string-laden lament of uncommon intensity (banned from Top of the Pops at the time due to some ambiguous lyrical content). The album earned Grammy and MTV Award nominations and is frequently listed as one of the best long-players of the 1990s. In truth, it’s not as brilliant as it thinks it is, but this is a collection that will always be well received when it pops up on shuffle  albeit primarily because of its still-stunning centrepiece, Today.

On to the band’s third album,  Despite the frequency of both its adolescent bluster and heavy-handed angst, there’s no denying that Mellon Collie and the Infinite Sadness is the work of a fully matured band. Down to its most diminutive detail, the album revels in the kind of art-rock pageantry that the Smashing Pumpkins were only fumbling toward on Gish and Siamese Dream: elaborate, symmetry-obsessed musical conceits, a romantic mythos inspired by everything from arcane astrology to Mother Goose fairy tales, and numerous poetic and visual allusions to Victorian-era culture, all coinciding with the band’s baroque expansion away from their grungy Sub Pop origins.

On paper, it reads like a mess, but the near-mystical and sprawling Mellon Collie remains the Pumpkins’ greatest album, the soaring vision of a band clearly in its prime.

That achievement is reinforced by its exquisite reissue, which, through dozens of previously unreleased demos, jam sessions, and B-sides, reveals the massive backdrop from which the double album’s esoteric sound was culled. As part of the package, the album’s original 28 tracks have been remastered by leadman Billy Corgan, who, after committing some obvious over-tweaking on prior Pumpkins re-releases, has opted for a light hand here. Most noticeably, the album’s thick, overcompensating low-end has been dialed back, greatly benefitting heavier pieces like “Jellybelly” and “X.Y.U.” while lending an overall crispness to the album as a whole. Mellon Collie‘s sound was noticeably smudged in comparison to the treble-happy crunch of predecessor Siamese Dream, and the remastering manages to wick away that muddiness as well as some of the album’s age spots.

The B-sides are far rougher in quality, but also far more illuminating of Corgan’s creative process: the quiet piano dirge that serves as the demo for “Eye,” for instance, and the two different takes on “Tonight, Tonight,” one orchestral, one band-only. Perhaps what’s most interesting about the demos and outtakes is how they reveal many of the finished tracks’ shared origins. When a rudimentary version of the main chorus from “By Starlight” suddenly emerges from the bridge of an early instrumental of “Beautiful,” thus proving that the two songs were originally one unfinished musical scrap, it feels as though a curtain’s been peeled back to reveal Mellon Collie‘s secrets, a satisfying thrill for listeners who’ve long combed through the album’s myriad layers.

Many in the music press thought it an egomaniacal bluff on Corgan’s part when he promised a double concept album to follow up Siamese Dream. Now listeners can finally hear why Corgan was so confident in the first place: Like its cover design, which reveals a larger art-nouveau tapestry surrounding the album’s original visuals, the Mellon Collie reissue widens the scope on the band’s prolific mid-‘90s output. Taken in tandem with their B-sides collection, The Aeroplane Flies High, it’s safe to assume that few other bands have ever produced such an embarrassment of riches in such a short amount of time. The songs from the Mellon Collie sessions speak not only to the quality of that abundance, but also to the Smashing Pumpkins’ status as some of the most creative and successful purveyors of sensitive but cerebral art rock.

The pumpkins defined a generation in the nineties and meant a great deal to me and remain on my playlist today,

As you were Castlebar,