Today’s Love Letter lets us take a look at one of the best bands of the eighties, THE SMITHS.

Having had a chance to listen carefully to the band from a very early age i can now safely say that i am a bit of a fanatic of this band.

Okay so lets get one thing straight, we all know MORRISSEY can be a bit of dick, actually no, he can be a right Asshole, often storming off stage in recent times and cancelling tours at the last minute, frowned upon by many disappointed fans. 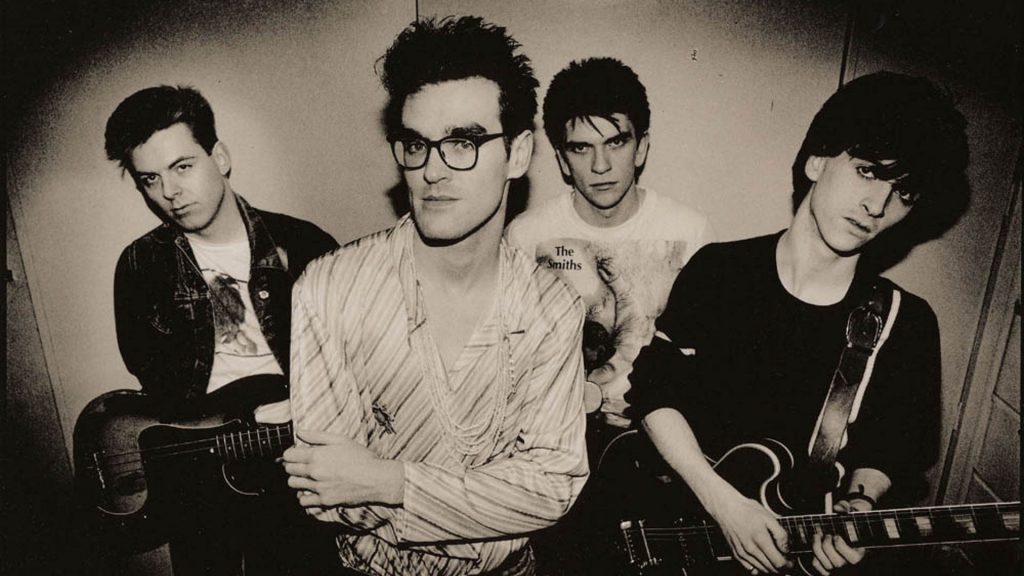 But we are not here today to talk about MORRISSEY. And this is a love letter after all and i do not want this feature to turn into some form of a “hate” letter!!

We are gathered here for today’s love letter  to very briefly look back on the career of the iconic Manchester band The  SMITHS.

I am going to post four of my favourite tracks from eachof THE SMITHS albums beginning with Reel Around the Fountain below, i hope you enjoy them!

THE SMITHS formed in 1982, the members of the band consisted of Andy Rourke, Morrissey, Johnny Marr, and Mike Joyce.

Before we begin, Let me quickly tell you a story,

I received  an email a few years back from Mike Joyce’s agent asking me if i would be interested in booking Mike Joyce to do a DJ set in Castlebar, at the time i figured how cool would it be to book one of the original members of THE SMITHS to come and do a gig in Mayo!! Even if it was only  a DJ set!!

Although at the time  i thought it would be really cool to try and make this happen,   but i also figured if i had booked the gig who would come to the gig and purchase tickets?

I mean we are not in the big smoke here, we are in the West of Ireland and how many people would know or recognise him? And a lot of this was also due to the asking fee which i wont go into here,

I think ill leave that one for my autobiography when i am much older and need the cash.

So may different thoughts went through my mind at the time, And yes, there was the act’s fee, could i cover it? I didn’t think i could,  so eventually i made the decision to not do the gig.

Was it the right one? Yes i do believe it was in the end.

Anyway, back to THE SMITHS, the band formed in 1982 in Manchester.

They recorded four albums under that label that included the self titled album The Smiths in 1984, Meat is Murder 1985, The Queen is Dead 1986 and Strangeways, Here we come in 1987.

They had several singles reach the top twenty of the UK singles  and all four of their studio albums reached the top five of the UK charts, including Meat is Murder which hit number one.

With members of the group not getting along they disbanded in 1987 and Johnny Marr and Morrissey went on to quite successful music careers.

In the early days of the band’s formation they  approached the record company EMI for a contract, but were turned down.

Although not signing them to a contract straight away, he agreed to cut their song “Hand in glove”  as a single.

Anyway i am going to keep todays love letter shorter than usual as you all know that i could probably write an never ending book on the band then we would end been here all day and we would miss that all important sermon at Mass this morning, Hope you have enjoyed this short piece and thank you for reading if you made it this far! I really do love THE SMITHS!!