Thanks There are always records that bring us back to our childhood to a special moment in time, a certain song, certain albums that just give you that special feeling back if you have not heard them in a long time. 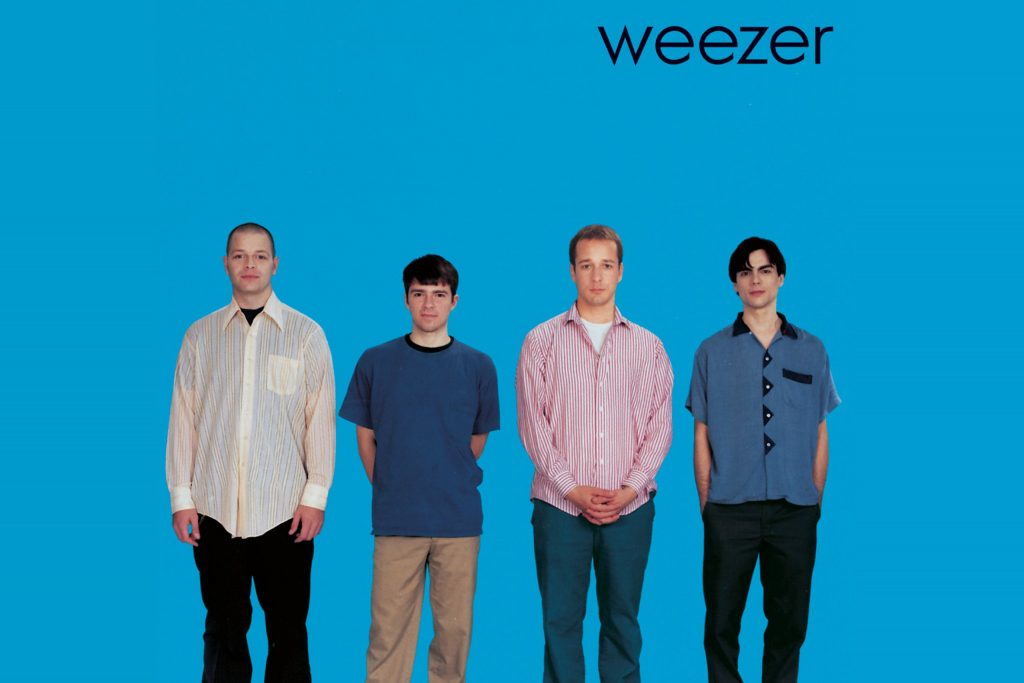 Weezer’s debut album is one of those records.

I definitely would have categorised myself as a nerd when I was in school, I was never into sport and I was never really one for paying attention in class. Music was always on my mind, and searching for new bands was a big love of mine.

I was sixteen years old,  a daydreamer longing for the outside world. But little did I know that an  unkown band at the time called Weezer  were just about to release one of the best pop/rock records of the nineties and this was going to have a huge impact on my teenage years.

The first time I heard Buddy Holly from Weezer’s debut album I thought I had made a new friend, a friend that understood me.

So many songs to choose from!!And then there was the brilliant track “In The Garage”

In The Garage I feel safe, no one cares about my ways”.

Every time I listened carefully to that track I felt I had finally found a band that knew what was going on. I never followed the wolf pack and I wanted to be different.

Weezer’s Blue album came at a very good time, repetitive grunge bands had come and gone and the world was looking for something new. Take Green Day as an example.

They were still riding on the success of Dookie.

The Blue album was released at the right time in 1994. Thank god!!

Weezer were formed in 1992 but it was not until 1994 before the band seemed to reap the success and awards.

The album artwork, photographed by American glamour photographer Peter Gowland features Wilson, Cuomo, Sharp, and Bell standing in front of a plain, blue background. Adobe Photoshop was used to digitally alter the cover. Cuomo stated that, while the band liked the photo, Sharp was not happy with the way his head looked. The Geffen Art Director used Photoshop to swap out the head with one from another shot.[21] The image was used prominently in the advertising of the album.

The Blue Album could be a greatest hits record in itself, every song being a gem!

If you grew up in the hey day of grunge, it may even seem absurd that the band were even considered poseurs, hair metal refugees passing themselves off as alt-rock by adapting a few tricks from The Pixies and Nirvana songbooks and sold to MTV with stylish videos.

Nevertheless, during alt-rock’s heyday of 1994, Weezer was second only to Stone Temple Pilots as an object of scorn, bashed by the rock critics and hipsters alike. Time though does have a way of healing, even sometime erasing, all wounds, and time has been nothing but kind to Weezers debut album which is now well known as The Blue Album.

I’ve revisited this album multiple times in the past few days, and i have to say, very little surpasses it for me. it’s pop punk/rock at its finest and i can get into it regardless of my mood. thats what makes an album perfect to me, and what makes the blue album a game changer in rock music and a perfect work that i highly doubt will be surpassed.

I listened to this album this morning., i am listening as i type this review. i cannot get enough of it. honestly im debating tagging this masterpiece. the guitars are some of the best I’ve heard on any garage rock album, some of the best in any album frankly.

Okay, so the lyrics can lag along a bit on some of the songs, but for the most part they are pretty great. the hooks are a stroke of genius, as are the melodies behind them. also, i found the drums to be especially good on this LP, a controlled form of chaos.
fav tracks: my name is jonas, the world has turned and left me here, undone, say it aint so!!

A collection of great, albeit overrated, power-pop classics. Weezer’s debut is one of the strongest of all time, and that isn’t hyperbole. Ever since I heard it, it has stood as one of my favourites by the band.
For a such a geeky, nerdy rock album, the Cuomo’s are honestly very solid. They do have that awkwardness to them, which the album utilises wonderfully.

He isn’t a masterful vocalist that will have audiences wowed, but he does his job well.
Even more surprising than that, though, is the amazing guitarwork. I loved almost every riff on the album and some of the solos (such as “Undone” or “Say It Ain’t So”) are just masterful.

There is also a sprinkling of acoustics at the beginning of the album (“My Name is Jonas” and “The World Had Turned and Left Me Here”) which are quite nice. Without the guitars, this would still be a great pop record, but with them, it makes for an amazing listen.
Another highlight of the album, and another mild surprise, was the great lyricism.

It’s very nerdy, and that helps give this album its own identity, and manages to be simplistically great, as well as (I won’t lie) a bit relatable.
All-in-all, Weezer’s debut, as I said earlier, one of (if not the) best debut albums of all time. It surprised me with all its different elements, and I’d honestly recommend it for anyone remotely into pop or rock.