Its being 5 years since Queens of the Stone Age released their last album titled “Eara Vulgaris” which was released on Valentine’s Day in 2007. I wasnt a big fan of the record after the bands previous records Lullabies to Paralyze, Songs for the Deaf, Rated R and the bands self titled debut album in 1998.

“I woke up and there was a doctor going, ‘Shit, we lost you,”  according to this weeks Irish Independent newspaper.

For a while i was worried if the bands time may have come and gone but i was also very glad to hear that Josh Hommes was on the road to recovery.
So here we are almost five years later and the band have just released the album “Like Clockwork”.

Its the bands sixth official studio album and again it comes out released on the Matador records label. It was rumored last summer that Nine Inch Nails frontman Trent Reznor was to produce the album. But then it was decided that frontman Joshua Homme was set to produce the entire record along with James Lavelle although Trent Reznor did produce one track on the album titled “Kalopsia” 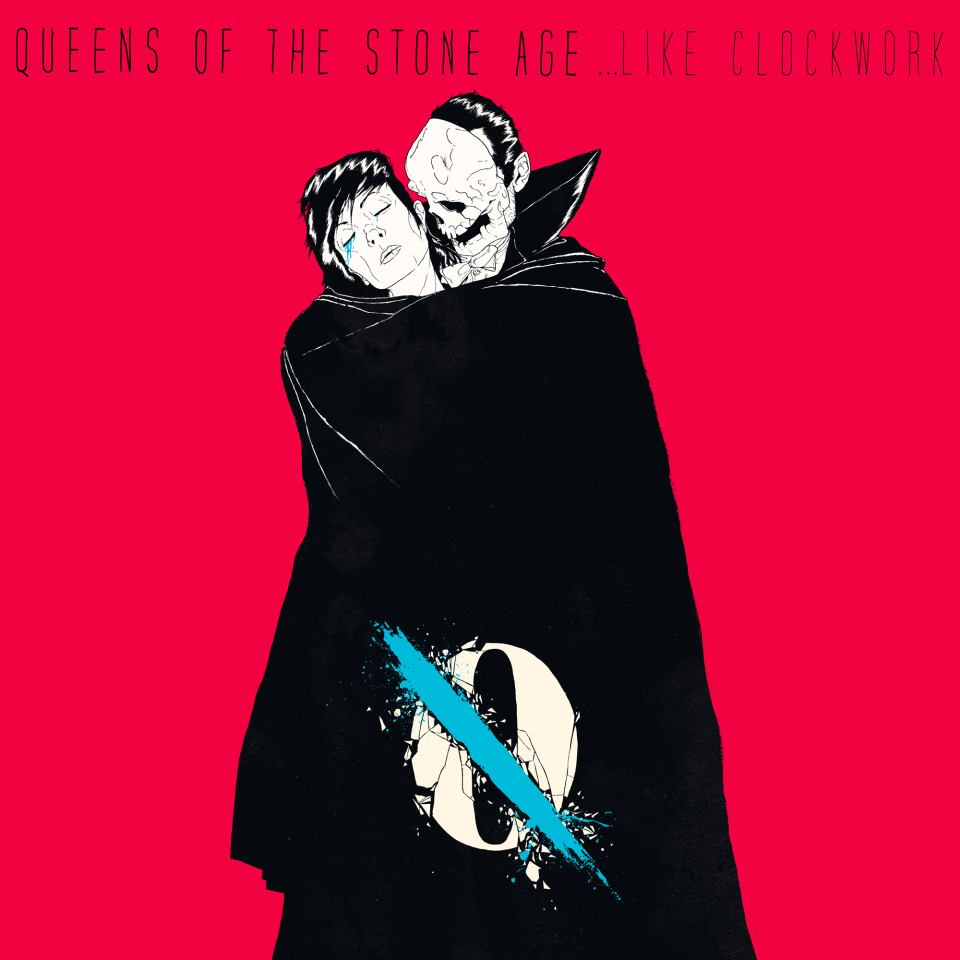 So here we are yet again with various vocal and guitar guest apperances from long time friend and collaborator Dave Grohl, Trent Reznor who appears and writes on the track “Kalopsia”.
Screaming Trees Frontman Mark Lanegan  even makes an apperance on  “If I had a Tail”.

Other guests on the album include Elton John on the track “Fairweather Freinds”.
I have listened to the album about 19 times since i picked it up over the weekend and i tend to keep discovering something new each time!

The album open’s with track Keep Your Eyes Peeled and a bass line guitar that would have the listener’s ear bleed sharply with a knife (but in a really good and dark way). Its on track two called “I Sat by The Ocean that i begin to feel myself settle into a groove for whats to come for the rest of the album. Almost setting the tone nicely.

I have a feeling in time my favorite tracks on the album will be become more varied but at the moment “If I had a Tail” is definitely one of my stand out tracks on the record. The more i began to listen to the song i  realized that this was going to become my new Saturday night “going out” track.

Oueens of the Stone Age have definitely matured on this record and perhaps its all down to Joshua Hommes recent “near death” experience. Here is a guy that seems to be coming clean and braving up to the rest of the world. Even Homme has recently confessed that the album is  “an audio documentary of a manic year,”

There is moments we hear guest apperances from members of ZZ Top and even Elton John himself lends a hand on piano and vocals on “Fairweather Friends. Personally i think this is the best international release of 2013 so far but it is also in contention with two other excellent records that i have being listening to a lot lately which include The National’s “Trouble will find me” and the new album from Alice in Chain’s called “The Devil Put Dinosaurs Here” which i hope to be talking about very soon here on the blog.

In the meantime can somebody please come around to my house as i seem to be having a problem with my CD player as the new Queens of The Stone Age album refuses to come out of my player because its so good!