In a recent interview on BBC Radio  Thom Yorke from Radiohead proclaimed that “This is me and my sons favourite music at the moment” when speaking about Irish act Girl Band whilst introducing one of Girl Band’s tracks on the popular radio station, Such an endorsement from the front-man of  one of the most important and influential  acts of the past twenty years  means only one thing, that Girl Band mean business.

Needless to say we are delighted to announce that Girl Band will be coming to The Garbos Venue in Castlebar Co Mayo on April 7th. The last few years have been momentous for Irish act Girl Band. Girl Band’s most recent album “Holding Hands With Jamie” on Rough Trade has raised great acclaim from The Guardian, NME, NPR, Vice, and further afield, they have being named as one of the best new bands of 2016 by Stereogum and one of the best rock bands active today by SPIN.

The Band’s most recent album Holding Hands with Jamie, Girl Band’s debut album, comes a few years into their tenure; a few years after their first tour, nine days crammed into a Fiat Panda; a few years of stamping 7″ sleeves to sell at merch tables and mail-order; a few years of writing songs, touring and developing a live ferocity unmatched by nearly anyone.
Recorded in April 2015, two days after returning home from their first-ever US tour, the nine tracks making up Holding Hands with Jamie capture, more than any previous recordings, the tension and abrasive energy of a Girl Band performance. 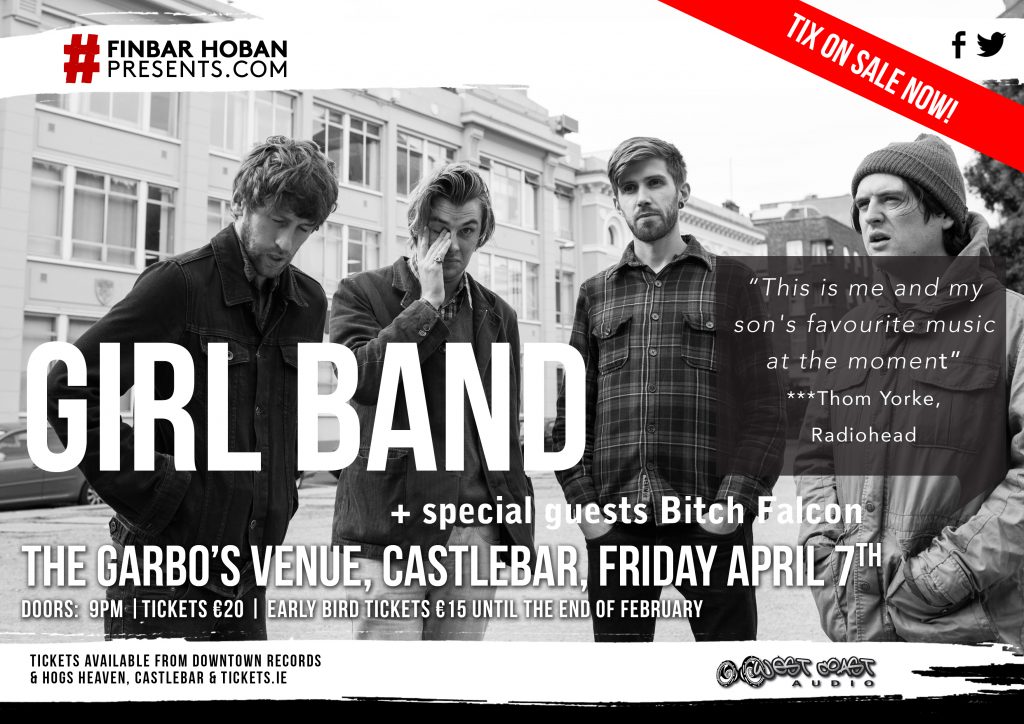 Recalling any number of things but for only milliseconds at a time, Girl Band make a mockery of comparisons, because you can only get as far as “oh this bit sounds like–” before a guitar scuff-screams, the bass crunches like a car in a bailing press, or something else visceral and glorious comes from the speakers, and the thought’s erased. One look at the new video for “Baloo” from their Rough Trade session and it is easy to see why the band has been the subject of such adoration. The quartet harnesses existential anxiety and wields it like a weapon, crafting a captivating cacophony. The band themselves have being recently praised from the likes of the very popular “NME” magazine and “Uncut” magazine as being ones to watch!

Support for this show comes from Bitch Falcon. The three-piece are set to embark on their first tour coinciding with the release of their newest single, “Clutch”.Two years on from an initial explosive emergence, the Dublin-based three-piece haven’t so much discovered their voice as honed and refined it. They relish in frenetic declarations, their sound always moving forward while throwing occasional nods to the past.

The sonic aesthetic is raw, even a touch frenzied, let manages to harness the strongest elements of rock, grunge, metal, hardcore and melodic electro-pop. Bitch Falcon’s end result is a distinctive, once-heard-not-forgotten voice. Pulsating tracks like ‘Wolfstooth’, ‘Breed’ and ‘TMJ’ are indicative of a band unwilling to sit still and stay quiet. These are songs of punch, grit and verve. They make an even greater impact up close and personal as the band’s deserved reputation as one of Ireland’s most engaging live prospects comes alive. In their short time together, the trio have shared the stage with the likes of Fucked Up, Torche, The ZZZ’s, Glen Hansard, Les Butcherettes, No Spill Blood and Red Enemy, unapologetically stealing the spotlight at every turn. 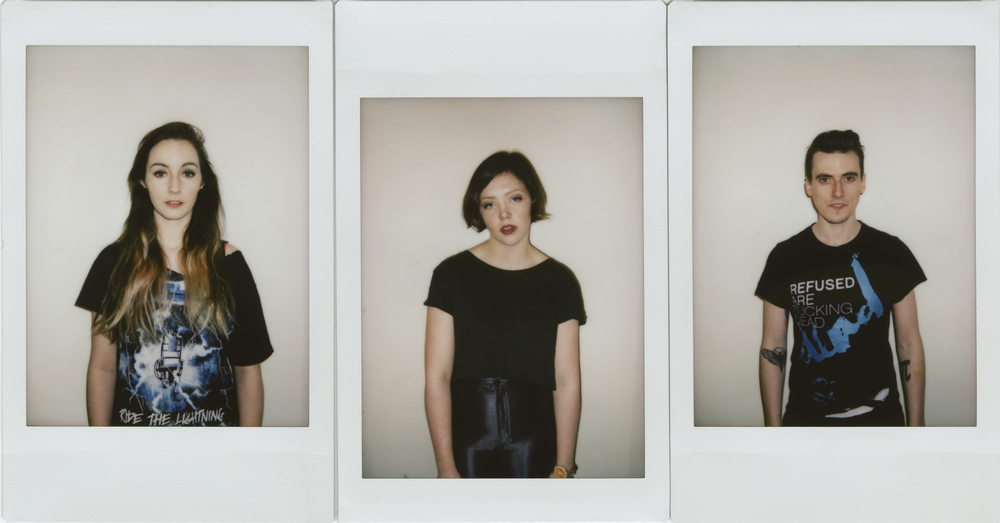 Catch Bitch Falcon When they support Girl Band at The Garbo’s Venue in Castlebar on April 7th, Tickets are on sale now through Downtown Records Castlebar and Hogs Heaven Bar in Castlebar. Tickets also available from tickets.ie

After a busy 2016 where they stormed the stages of Body & Soul, Indiependence, Knockanstockan & Electric Picnic; Bitch Falcon will take flight for Canadian Music Week and other international events in 2017 as well as releasing brand new material throughout the year. Early bird Tickets for Girl Band and Bitch Falcon live at The Garbo’s Venue in Castlebar on April 7th are now on sale and are available from Downtown Records and Hogs Heaven Bar in Castlebar. Online tickets are available through tickets.ie. Further info visit finbarhobanpresents.com