Its a Friday evening and i have just walked away from the week from hell but hey i am not complaining because i am just sat here in an empty cinema in Mayo Movie World in Castlebar  with my favourite bowl of popcorn waiting in anticipation for JOKER to come on the gigantic  plasma screen in front of me.

Get ready to rethink what’s possible in comic book movies, Joker  an origin story of Batman’s arch nemesis  and if you thought The Dark Knight and Logan pushed the boundaries of adult storytelling and Oscar quality for these types of films, Joker  ups the ante. 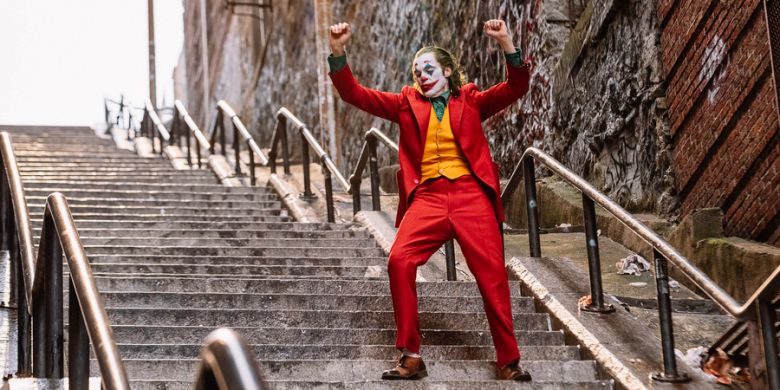 Before I dive into my full review, let me quickly debunk the silly myth that Joker is not based on the comic book character and/or takes no inspiration from the comics.

I assure you, that ridiculous claim is as bogus as it should’ve obviously seemed to everybody as soon as they heard it. Yes, the film takes inspiration from the source material, and yes it specifically has scenes directly inspired by certain comic book stories and influences the third chapter of Frank Miller’s The Dark Knight Returns provides inspiration for one scene fans will instantly recognize, for example. So, forget that ridiculous rumor.

Arthur Fleck (Joaquin Phoenix) isn’t happy with his life. He struggles to make money as a part-time clown while sharing a rundown apartment with his ailing mom (Frances Conroy). But Arthur lives in a city struck by hard times where a decent, honest living is difficult to come by. He also suffers from a condition that causes him to break into uncontrollable laughter.

Phoenix’s Joker is a heavier, more brooding and introspective figure than that of Heath Ledger in Christopher Nolan’s The Dark Knight.

“He doesn’t have Ledger’s quicksilver energy. He moves more slowly. However, when his malevolence is finally unleashed, he is just as effective a lord of chaos.”

Led by Phoenix’s ferocious, feral performance, this especially dark, gritty comic book movie is a character drama that’s drawn more toward real-world troubles than to capes and crusading. With Joker, director Todd Philips  sets aside his penchant for juvenile comedies like The Hangover and channels early Martin Scorsese, especially Taxi Driver   and The King of Comedy.

The film rages at the human condition and the darkness that might break a person and turn that person into a monster. Specifically, Phillips points fingers at the wealthy and powerful, who claim to want to help but make it impossible for the downtrodden to pick themselves up.

I must say Phoenix portrayal as the Joker is at times more “art-house” than his predecessor Heath Ledger. He moves more slowly through out the film until we get to see him in full on Joker mode in the last quarter of the film. 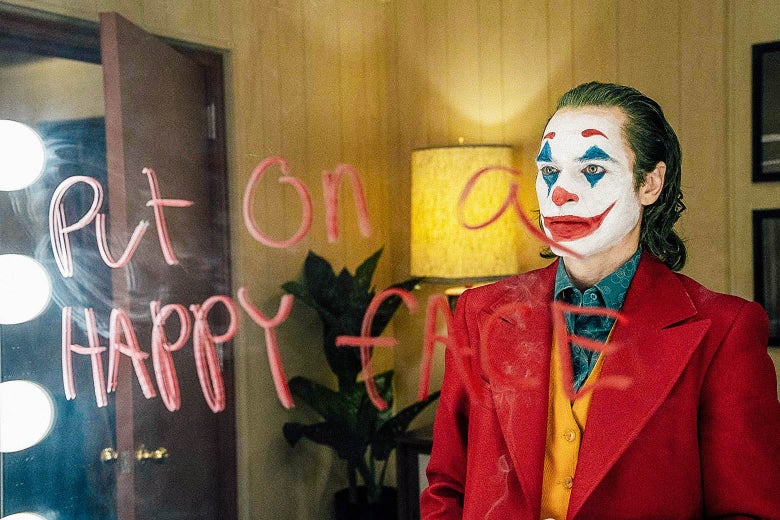 Phoenix embodies the utter despair of this situation, digging deep with a full-bodied performance, forever struggling to find hope but failing. Skeletal and dark-spirited, he moves his limbs like a balletic spider, either twining as if spinning a web or flailing and flapping like a manic cartoon character.

But Batman’s famous nemesis isn’t just villainous any longer; he’s a heartbreaking mistake that could have been prevented. It’s no coincidence that Joker is set during a garbage strike, given that humans here are thrown to the curb just as easily as black plastic bags. In this very bleak movie, the bright colors of the Joker’s clown makeup offer a violent, horrifying escape.

So lots of reviewers are bringing up the mental health issue in the film and how mental health is a subject that no one should be making fun of, of course this is true but isnt it still something that should be explored rather than shoving underneath a carpet? Of course not! I am hoping that certain moments from the movie will not shy away from the mental health debate. And then there is the gun debate, but lets not spoil this entire review about some of the negatives.

Joaquin Phoenix gives a tour de force performance, fearless and stunning in its emotional depth and physicality. It’s impossible to talk about this without referencing Heath Ledger’s Oscar-winning performance from The Dark Knight, widely considered the definitive live-action portrayal of the Joker, so let’s talk about it. The fact is, everyone is going to be stunned by what Phoenix accomplishes, because it’s what many thought impossible  a portrayal that matches and potentially exceeds that of The Dark Knight’s Clown Prince of Crime

By the end of the movie Phoniex’s Joker is glowing  with confidence. Transformed into a menacing clever killer. We recommend checking out  what we feel is one of the best acting performances transferred onto the big screen in a very long time! And lets not forget about the wonderful score  from composers Hildur Gunonadottir and Johann Johannson which held the entire movie together. Go see it!!