Seamus Fogarty from Mayo is a very insightful Mayo artist, according to his bio  he says  he write songs. about things. that have happened to me. and other people. I generally use some combination of fiddles, banjos, guitars, computers, sea shells, chopsticks, toast, garlic etc…. 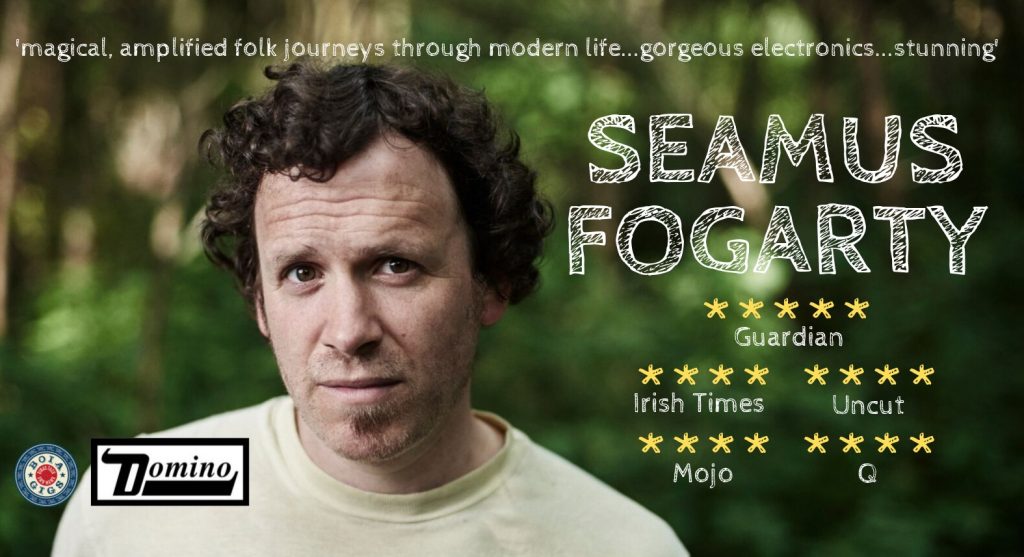 Originally from County Mayo on the west coast of Ireland, Fogarty now resides in London and with barnstorming live performances and a stunning second album, The Curious Hand, that sent critics into raptures.

Whether singing about Van Gogh or sleeping in a church in Carlow, Fogarty is a kind of anthropologist, a collector of stories and sounds lifted wholesale and tucked into the folds of his songs. On record his delicate alt-folk is enriched by a dazzling array of electronic pulses, but it’s live that his songwriting talent and troubadour spirit really come to the fore.

Singed to Domino Records, left his home in the West of Ireland in 2009 and ended up in Anstruther performing at the legendary Homegame festival. His debut album, hailed by the Irish Times as ‘one of the best Irish albums of recent years’, was released on Fence Records in 2012 leading to a slot on the main stage of Greenman and tours alongside James Yorkston, Pictish Trail and Malcolm Middleton. Having spent the following two years touring the UK and Europe, he released an EP “Ducks & Drakes” on another Scottish label, Lost Map, in 2015. Gideon Coe from BBC6 Music proclaimed the title track to be ‘one of the songs of the summer’ while Max Rheinheart from BBC Radio 3’s Late Junction proclaimed it the work of an ‘Electroacoustic Wickerman’.