Ryan Sheridan has just announced a show at the Garbo’s venue in Castlebar!

Ryan Sheridan leapt from the street to centre stage headline act in less than a thousand days. A gifted and inventive guitarist, he has combined his dazzling six-string skills with a jet-propelled percussive attack to create a unique sound that has thrilled packed houses from Dublin to Dusseldorf. A born entertainer, this passionate singer with a gift for storytelling is a commanding stage presence; and his acoustic-driven, anthemic, twenty-first century rock ‘n’ roll, with it’s roots deep in rhythm and blues, connects with audiences wherever he is seen and heard. 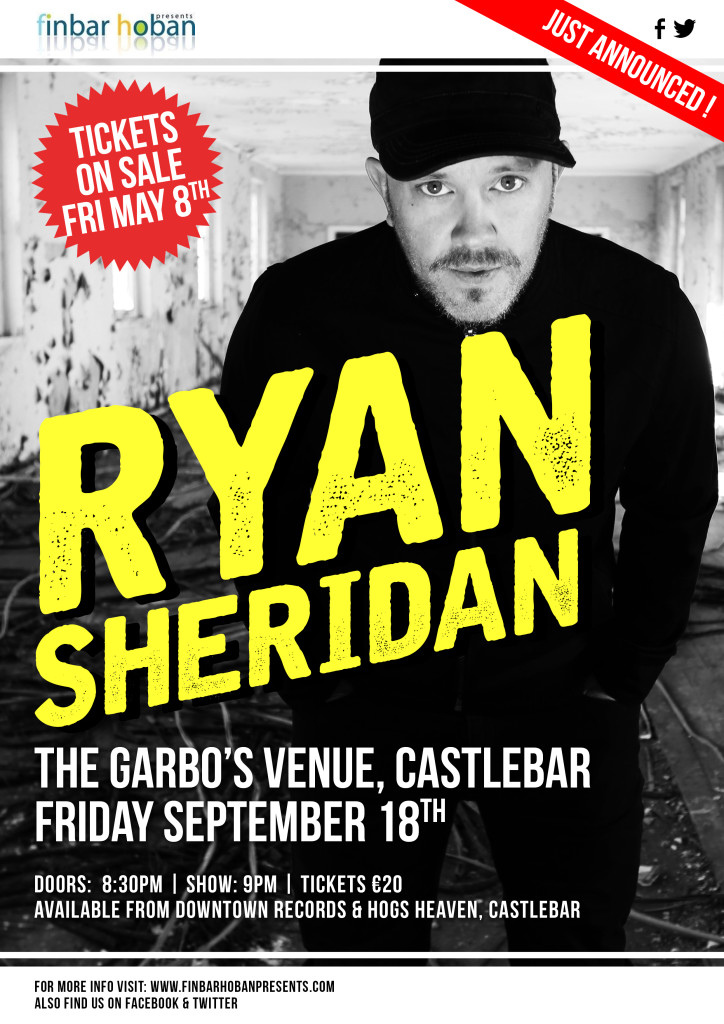 Ryan Sheridan’s debut album – ‘The Day You Live Forever’ – was released in 2011. Fuelled by the massive hits ‘Jigsaw’ and ‘The Dreamer’, the album was only kept from the top of the charts by Adele, and went on to achieve platinum status in Ireland. Packed arena shows with Taylor Swift, The Script and Bryan Adams followed, and Ryan’s international reputation started to spread worldwide.

2012 saw deals done with Universal Music in Europe and Australia, and ‘The Day You Live Forever’ climbed to the top of the German charts. Extensive touring followed, and much of 2013 was spent thrilling European audiences with his high-octane live shows, together with high-profile TV and radio spots.

With a teenage apprenticeship as a dancer, it is no surprise that rhythm underpins the music of Ryan Sheridan. His songs are torn from the pages of a passport seeking out the wonders of life, from joy to sorrow; and all stations inbetween. Classic high-energy explosions such as ‘Stand Up Tall’ are now balanced with haunting ballads like ‘2 Back To 1’ and the heartfelt longing of ‘Home’; specially commissioned by Brendan O’Carroll as the love theme for ‘Mrs. Brown’s Boys: D’Movie’.

Currently putting the finishing touches to his second album with his cracking band of young musicians. Ryan Sheridan can’t wait to bring his thrilling, all-embracing new music to his fans across the world. There’s a fire in his belly, anticipating stories to be told, rooms to be rocked; and fresh chapters to be written.

In what promises to be a brilliant night in store for the Garbo’s music venue tickets for Ryan Sheridan’s very special appearance will go on sale next Friday May 8th and will be available through Downtown Records and Hogs Heaven Bar Castlebar!