Hot on the heels of an RTÉ 2FM Track Of The Week with previous release ‘Breathe Easy’, Limerick four-piece Raging Sons are keeping the momentum with their new single ‘Square One’.

With debut album ‘20:20’ set for release on October 22nd *, ‘Square One’, mastered by Robin Schmidt (The 1975, Sam Fender, Nothing But Thieves) is their fourth recent single, and a fire-starter.

“We like to think about the ‘history’ of our songs, their story and musical evolution * from one to the next,” explains Adam Reeves, the band’s drummer. “And this song… this is the sound we were striving for, all through the process recording of our album.”
Guitarist Colum Kelly nods in agreement. 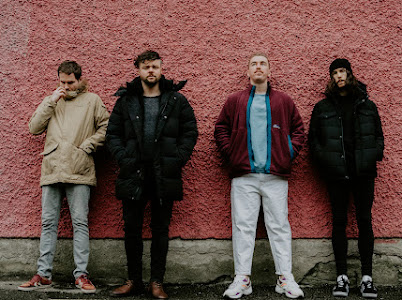 “Yeah. ‘Square One’ is it, the sound we were working toward and a window into our future.”

Raging Sons are a band that nearly weren’t *. After splitting up for a period in 2018 *, the band reconvened. “Yeah, we split up actually, for a moment,” * says Adam. “Then we were like, no, hang on – there’s something special here, something worth fighting for.”

Colum chimes in again, “Yeah, it was silly, we knew we weren’t really done but we were frustrated with ourselves and how things were going. Shortly after we got back together we started working on the album”
Almost three years on, it’s hard to believe Raging Sons ever faltered.

Both Colum and Adam speak openly about the bands that have helped them figure out the sound which is gaining them notice, whilst ironically sounding strikingly unique. They are brutally honest. “I hate that bullshit – when other bands and artists repeat the trope ‘it’s hard to say what we sound like, our sound is so unique…’” says Colum.

“We’re not really afraid to talk about other bands and artists who have influenced us. We’re all influenced by something – we’re a mix, of course, of who we listen to, both individually and collectively – and that’s good. We’re not entirely unique. How can we be? Everything is derivative of something.”

Despite saying this, Raging Sons remain difficult to place. ‘Square One’ is evocative of bands like U2, Nothing But Thieves, and Muse, all at once. On top of this, the band have more recently steadily increased the incorporation of synth and electronic sounds into their music. “Yeah. It’s an evolution you’ll hear throughout the album.”

“We love electronic based music. It’s something in all of our tastes, in the band. We’re big fans of The Slow Readers Club, Public Service Broadcasting and Depeche Mode, for example. There was a time when we were writing music that wasn’t really congruent with the music we listened to and loved. We were just writing to write, playing to play. Now we don’t do that. Now we play the kind of music we love. The kind of music that feels authentic.” Colum says, contently.

It’s a contentment that shows itself in the good health of Raging Sons rich songwriting. Long may they create music which is in harmony with what they love – alt rock, indie and pop listeners far and wide are the ones who stand to gain.

Speaking of ‘Square One’, “a serendipitous, happy-accident moment,” is how the band describe its creation. “We didn’t have a prolonged amount of time to write, arrange and prepare this song, like we usually do, like many of the other songs on the album” Adam says.
In fact, Colum, Adam and bassist Damo hadn’t heard the song for longer than 72 hours, when it was brought to them by songwriter and vocalist Fint, before the four of them had it done, dusted and recorded.

“There’s a different feeling with ‘Square One’, a rawness, a naturalness which came about on the day. It was a really fresh song when we recorded it – we just had fun in the studio that day – this song is what came of that.”
The lyrical message of the song concerns a call to arms. “It’s partly about challenging those around you to fight for a collective cause, to persevere through conflict and to raise the game for a shared goal,” says Adam. Fint Tynan’s emotive lyrics invite listeners to “choose your side, your side or mine.”

‘Square One’s’ music video further explores this – a devastating, black mirror esque production directed by Shane Serrano of Crude Media which explores how new technologies can destructively influence human behaviour and how the chase for viral moments can lead us down dark paths.

A young child discovers a phone at a birthday party, and is driven by an excitement at the possibility of online acclaim for the bloody and brutal. It’s is not for the faint of heart, yet depicts a reality which hides under the surface of the social media services we all use. Raging Sons are using the medium of art they know so well how to wield, to observe the human condition, ask interesting questions and start uncomfortable conversations.

Check out the new track ‘Square One’ below now!!