Despite the pandemic dramatically impacting musicians in every corner of the planet, The Last Vinci have been working nonstop since the beginning of 2020 on their new LP.

After an Album, an EP and several tours, the Band came back to the studio during April 2021 teaming up with Liverpool producer Tom Peters (who produced unreal bands like Alpha Male Tea Party, Bicurious, God Alone, and many others) for what is shaping up to be their biggest release to date. 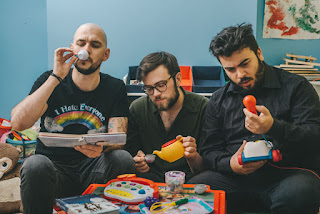 The Last Vinci is a Creator of musical experiences, an Alternative rock/Stoner Band, for the lovers of heavy riffs and deep life meaning.

Conscious of the power of musicians working together, the Album will also feature several Irish Artists who shared the stage with the band during their 2019 tour.

With the lack of gigging due to the pandemic  crisis, getting the budget together to record the Album has been very hard; pushing the trio to raise a call to their fan base by launching a Gofundme Campaign on December 15th 2020, in support of the recording expenses.

The response from The Last Vinci’s fanbase came promptly, helping the band to raise over 2k in the first month of promotion and collecting 5k in total at the end of the campaign, also thanks to their Hilarious promotional video produced and filmed by the band itself.

The new LP promotion will kicks off  with the new Single “Gallow”, an Anthem born from an open call posted by the band on their social media during the Summer of 2020, asking their fans “What are you not doing because of Fear?”. The song includes vocal samples of the responses sent in by the fans, supported by the band’s motto “Fear is the biggest Lie”.