Tickets for Declan O Rourke”s highly anticipated show at The Garbo’s venue in Castlebar will go on sale next Tuesday morning at 9.00am January 20th and will cost just 20 euro. Tickets will be available from Downtown Records and Hogs Heaven in Castlebar.   Declan O Rourke will play a very intimate show at The Garbo’s venue in Castlebar on February 27th as part of the Finbar Hoban Presents series. Support on the night will come from the very popular  VerseChorusVerse.

Declan O’Rourke has achieved critical acclaim for his songwriting, singing and performance. Jon
Pareles of The New York Times said there was virtuosity in his guitar playing, with ‘intricately
contrapuntal picking and meticulous dynamics,’ and that his calling was as a balladeer. Paul Weller
said of O’Rourke’s song ‘Galileo’ that it’s possibly the greatest song written in the last thirty years.Declan plays to sold-out crowds in his native Ireland and, more recently, further afield. A consummate and versatile performer, his songs mesmerize regardless of whether performed solo, with a band, string quartet, full orchestra, or as a trio. 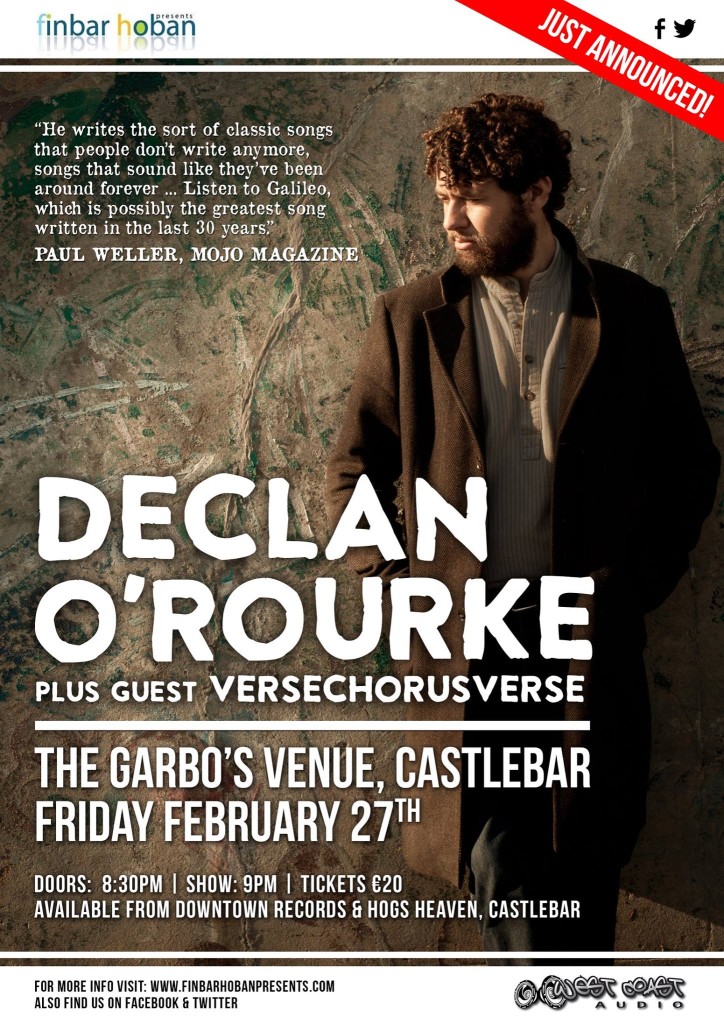 Declan’s debut album in 2004, Since Kyabram, debuted at no. 5 on the Irish Charts and scored double-platinum sales, earning him three Meteor Awards nominations including Best Male, Best Album, and Best Folk/ Traditional Album, as well as landing him a recording
contract with V2. His debut album launch took place over three sold-out nights in Whelan’s, one of Dublin’s
most popular music venues, broadcast live nationally on Today FM.

The debut single ‘Galileo (Someone Like You)’ has been recorded and performed by many artists, including singer Josh Groban who cut it for his album Illuminations. Declan performed ‘Galileo’ at the 25th Anniversary Gala Celebration of Ireland’s
National Concert Hall, at the opening ceremony of the 2011 Solheim Cup, and at the BBC-televised ‘Proms in the Park’ with the Ulster Orchestra in Belfast. O’Rourke’s second album Big Bad Beautiful World, released in 2007, has also gone Platinum in
Ireland, debuting at no. 4. Support slots followed in the UK and Germany to the likes of Paulo Nutini, Teddy Thompson, The Cardigans, Divine Comedy and Badly Drawn Boy. In 2010 he released his third studio album Mag Pai Zai under his own label, Rimecoat Records. It
topped the success of his first two albums, holding its own in Ireland’s Top 10 Album Charts for four consecutive weeks, and scoring ‘Album of the Week’ on BBC Radio Scotland and RTE Radio

A Little Something,’ the album’s first single climbed to no. 2 in the Today FM Top 40 Singles Charts. Mag Pai Zai also made it into The Irish Times’ ‘101 Irish Albums to Hear Before You Die.’In late 2013, O’Rourke released Mag Pai Zai in the United States, his first recording available Stateside. Distributed by the Orchard, the US version garnered critical acclaim from such national media outlets as the The Wall Street Journal, Spin, American Songwriter, Travel & Leisure, NPR’s World Café and USA Today.

Tickets for Declan O Rourke’s exclusive show at The Garbo’s venue in Castlebar go on sale this coming Tuesday Jan 20th and  will be available from Hogs Heaven Bar and Downtown Records Castlebar. Support on the night comes from VerseChorusVerse, Tickets cost just 20 euro.