It’s also a film shrouded in secrecy: we know it’s long (some rumors have suggested as long as four hours, but who knows if that’s true), we know who’s in it (the cast includes Robert DeNiro, Joe Pesci and Al Pacino), and we know that elaborate CGI effects have been employed to de-age some of the film’s older actors, but most of what we’ve actually seen from Scorsese’s latest has arrived in the form of on-set photos and unofficial leaks. 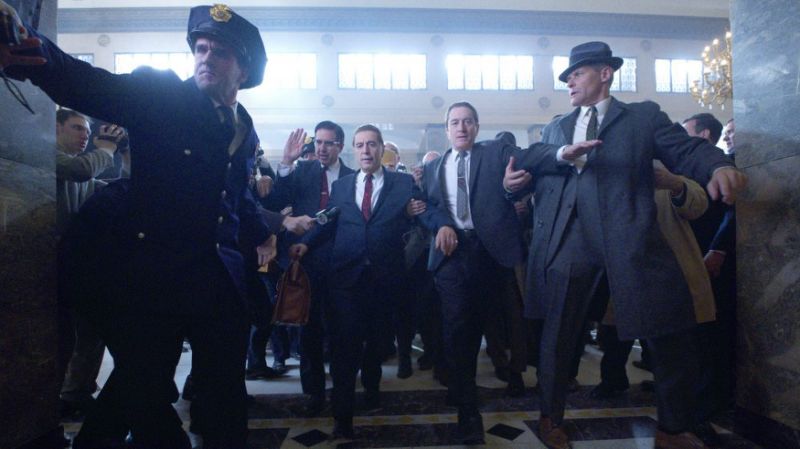 The Irishman will hit Netflix most likely this winter

This is, of course, classic Netflix behaviour, but still: we’ve been dying for a good look at this movie ever since it was announced.

Yesterday  we’ve got a little relief in the form of two new Irishman images, both of which were released in conjunction with the announcement that the film would open this year’s New York Film Festival. Let’s take a look at ’em and see what we can see.

Here we have DeNiro alongside Al Pacino’s Jimmy Hoffa. I don’t want to spoil anything for our younger readers, but if you know anything about Jimmy Hoffa you know that he’s looking remarkably relaxed and not-dead in this image. Wonder how long he’ll stay that way?

As of now, there’s still no release date for Scorsese’s film, nor is there any detailed information on how many theaters it might find its way into when it arrives later this year. Given its premiere at the NYFF, it seems likely this’ll be released around Thanksgiving or Christmas, but of course that’s pure speculation.

So, as you can see below , that’s Robert DeNiro as the titular Irishman (and infamous hitman), Frank Sheeran. It looks like some of those fancy-pants de-aging VFX are at play here, given that DeNiro appears notably younger in this image than he does in real life, but that might just be good makeup. Whatever bar he’s in looks like a classic Scorsese joint, too. We assume this will serve as the location for someone getting stabbed (or a bottle smashed over their head).

We are really excited for this movie and we will keep you updated on further info as we get it!!