You can tell that ‘Down Stream’ focuses on large harmonies with spectacular results!

The group have been working hard on their craft showcasing their original material in the US, taking in Music Festivals in Orlando, Nashville, Indianapolis, Cincinnati, Chicago, Boston and Milwaukee on their travels with funding from Culture Ireland. 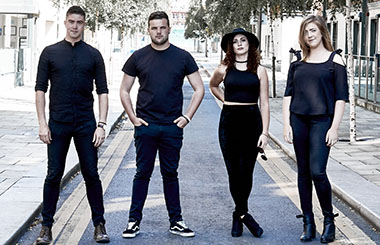 During the pandemic lockdown, Billow Wood were thrilled to have music from their debut album ‘Walls Of Caves’ receive airplay from Today FM, RTE Radio One, BBC Radio Ulster, BBC Radio Foyle, Radio Na Gaeltachta as well as a number of regional and local radio stations. They also appeared on Irish Television TG4 for two separate programmes showcasing their original material.

’Down Stream’ is perhaps BILLOW WOOD’s best release to date and we can not wait to hear what the band have planned for the future.

Listen to Down Stream below and hear the track for yourself.