Anticipation is underway as recent   details are emerging that AND SO I WATCH YOU FROM AFAR’S new album “THE ENDLESS SHIMMERING” will be out next Friday  via Sargent House October 20th. Also the band have  just released there brand new track called “TERRORS OF PLEASURE”, the third and final single from the new album.

The band have also announced a date at The Garbo’s Venue in Castlebar on December 29th with tickets now on sale through Downtown Records, Hogs Heaven Bar Castlebar and Tickets.ie. We caught up recently with band member Rory Friers and he says “Castlebar has always being special place for us to play and we cant wait to get back there in December, we promise its going to be one hell of a party”

Instinct. We all know what it is, but are hard pressed to acknowledge just how it guides us. Instinct subtly defines our identities, despite our attempts to defy it. The Endless Shimmering, the fifth album by Belfast, Northern Ireland quartet And So I Watch You From Afar, is the sound of a band operating on its pure instincts.

Every individual is an algorithm of prior lives and experience acting as its own sovereign entity. Every band is itself a combined algorithm of those instincts, driven by unconscious will to replicate itself in the world as if it were flesh and blood like the people who embody it. The Endless Shimmering is visceral and expressive — decidedly alive and purely instinctual; not conceptualized or postured. It’s ASIWYFA — guitarists Rory Friers and Niall Kennedy, bassist Johnathan Adger and drummer Chris Wee — manifest as a being beyond itself. 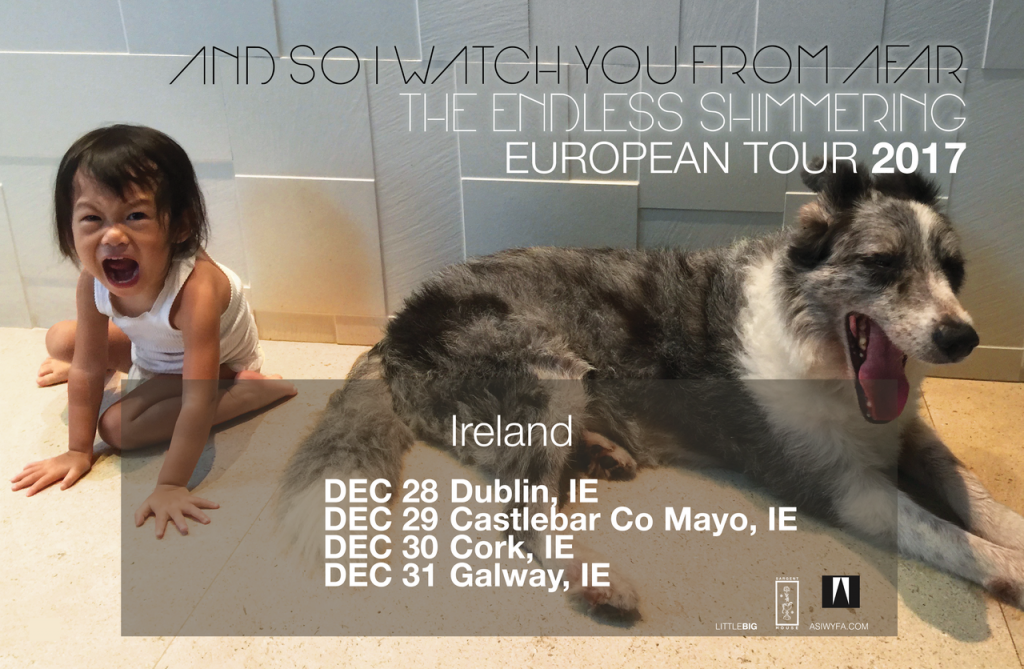 “We laid everything bare and put everything we had into the songs,” Adger says. “And we hope people can feel that and use that without us having to be to overt in how we present it. The album was charged with a lot of what we were all going through as individuals, but we wanted to allow it to become people’s soundtrack to whatever they need in their life at this moment.”

Perhaps the most immediately noticeable difference on this album is that the ensemble vocals of the previous recordings Heirs and All Hail Bright Futures is dialed back considerably to allow the music to come to the fore. The difference gives the musicians freedom to stretch out and truly shine as performers.

The decision was made early on that this record would not be rushed toward completion and the band allowed themselves the time to let it come together organically. “We wrote around 30 tracks before deciding these 9 tracks would make the record,” Friers explains. “We then spent a long time playing them everyday to allow them to become almost as if we’d already toured them, ingrained in our muscle memory.”

The band flew to Machines with Magnets in Pawtucket, RI in March 2017, aiming specifically to record live performances of the songs. Just as they arrived, a major snow storm brought the Northeast coast to a standstill. “We tracked, ate, washed and slept at the studio,” Friers says. “And 9 days later we had recorded and mixed the entire album just as the snow began to melt.”

The album opens with a brief, hushed guitar murmur as Wee’s forceful galloping beat sets course on “Three Triangles” while the guitars seem to slowly awaken with whining notes that slowly build upon one another until it all abruptly halts. The whole band suddenly kicks in with chopping start and stop blasts as the chirping lead melody leads the proceedings toward a swirling apex. Elsewhere, “All I Need is Space” and “Terrors of Pleasure” show the band at their finest, unfolding complex, bobbing guitar figures over propulsive and jagged rhythms, while occasionally lunging into ethereal blooms at the drop of a hat. The title track’s unabashedly beautiful and hopeful melody begins so quietly it’s as if it tries to sneak in under the radar as palm-muted arpeggiated chords and a clean plucked single note line asserts an optimism that finally infects the rest of the band, as they join the chorus of, well, near endless shimmering. Album closer “Chrysalism” is just the anthemic rush that makes ASIWYFA’s live shows such transcendent experiences.

The Endless Shimmering will be available everywhere on LP, CD and download on October 20th, 2017 via Sargent House. Tickets for the Castlebar date are on sale now through Downtown Records and Tickets.ie , Tickets are also available from Hogs Heaven Bar.