Existing in the liminal space between shoegaze, post-punk and noise-rock, the claustrophobic single combines muscular, industrial drums with groove-driven krautrock-inflected bass and discordant, wall of sound guitar lines that sit somewhere between the atmospheric, crushing power of My Bloody Valentine and angular and jarring sound of Big Black. 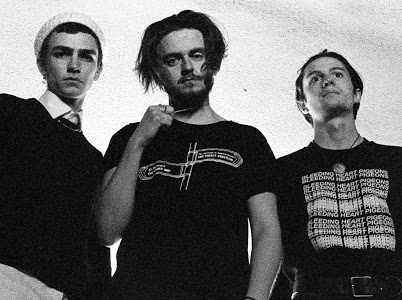 The volatile, low register spoken-word vocals carry the same pensive pent-up energy as Slint, brooding in white hot intensity, and occasionally breaking under their own weight into anguished yet invigorating screaming.

Thematically, Leigue is a song born out of painful circumstances. In late 2019, a close friend, former band member and fellow musician from the band’s hometown Ballina  passed away, leaving the band in a state of shock and disarray. This feeling of loss and confusion led vocalist and guitarist Kyle Thornton to begin to distract himself for several months with drinking, over working and isolating himself from friends and family, unable to understand how to deal with his grief in any other way.

Being the lyricist of the band, he didn’t write anything for 5 months after his friends passing, knowing that the next thing he wrote would have to relate to this in some way. The first song written after this period was “Leigue”, a song that lyrically deals with the dangers of trying to ignore grief and allowing unhealthy coping mechanisms to begin to rule one’s life.

Speaking about the single, Kyle Thornton says, “We feel as though Leigue was a bit of a turning point for us as a band, towards something more mature and cathartic. It’s paved the way for how our sound and attitude has changed over the course of the last year. It’s still intense and still fun to play but it means more to us now than I think it ever has.”

Nerves have gone from strength-to-strength at an astonishing rate and with an array of early critical acclaim and renowned live shows behind them, the new single is a thrilling prospect and a huge statement of intent, which is not to be ignored.

Listen to ‘Leigue’ on Spotify below now.