Tis the season for fans of the NETFLIX hit series STRANGER THINGS as the third season has being a massive success for the online website streaming provider.

Let me begin by saying there is no way i am paying NETFLIX a monthly fee just to watch STRANGER THINGS. Luckily i feel that i am not alone in thinking this way either. And yes there are other streaming sites out there  (Ahem cough! cough!)

Also lets be clear, there are no spoilers in this article, only a few stills from the recent third season.

I wanted to take a look on this fine Friday morning at the series continued success, although the DUFFER BROTHERS have clearly stated that the series will only have four seasons.

The series has become a worldwide  phenomenon with not just the younger generation of today but also that much older generation that are now in their forties that can related to the show and its’ culture from growing up in the eighties.

Lets face it, the producers have pretty much nailed it with that 80’s vibe. From the clothing, hair, right through to it’s fabulous original electronic soundtrack! 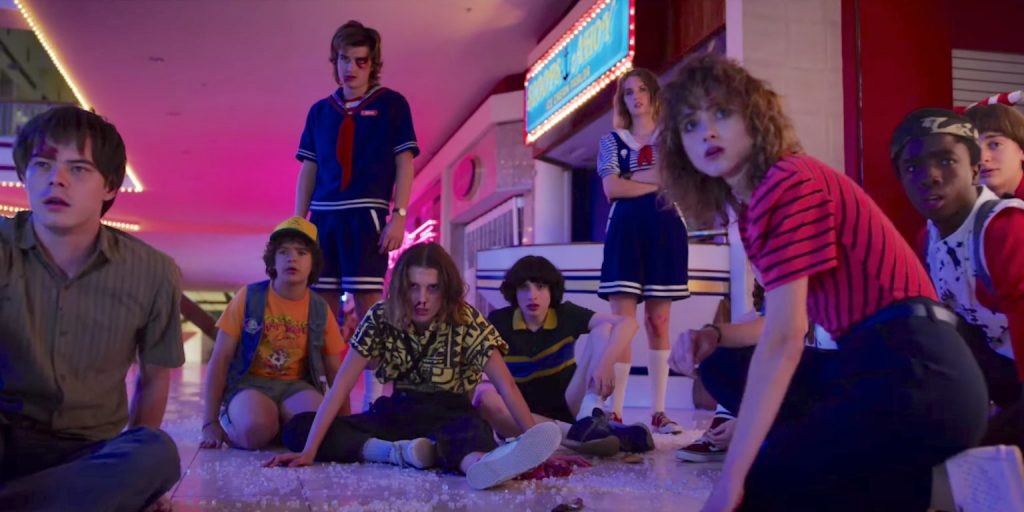 Lets briefly take a look at the seasons success, the music! Fans of the series are  probably well  aware of its soothing and yet sometimes often chilled out original soundtrack.

The original soundtracks are composed by Kyle Dixon and Michael Stein of the electronic band SURVIVE who are really wonderful! You have to check them out!! Trust me they are really great!

SURVIVE’s music first came to the attention of THE DUFFER BROTHERS when they watched the movie THE GUEST from 2014. The first time i heard the original soundtrack from season one i immediately felt that i was in JOHN CARPENTER territory.

While creating a mock trailer that that was later used to sell the show to Netflix, the Duffers decided to use Survive’s song “Dirge” to serve as the trailer’s soundtrack. Once the show was green-lit,

The Duffers contacted Survive around July 2015 to ask if the group was still together and available to potentially score the season; in turn, Dixon and Stein provided the production team with dozens of unreleased songs from their band’s past, which aided them in their bid for the job.

The show’s theme is based on an unused piece Stein composed much earlier that ended up in a library of work that was available for potential commercial licensing. The duo shared a “loose” version of the potential demo with the production staff, who thought that with some reworking it would be good for the opening credits.

Dixon and Stein proceeded to retool the demo, and on the staff’s suggestion, made it “bigger, bolder and kind of build to a climax,” a goal that was ultimately achieved with the inclusion of Prophet V, Roland SH-2, and Mellotron synthesizers, coupled with the usage of various filters.

Everything about each season’s soundtrack though  is simply out of this world and each song is coordinated and fits perfectly with each scene. 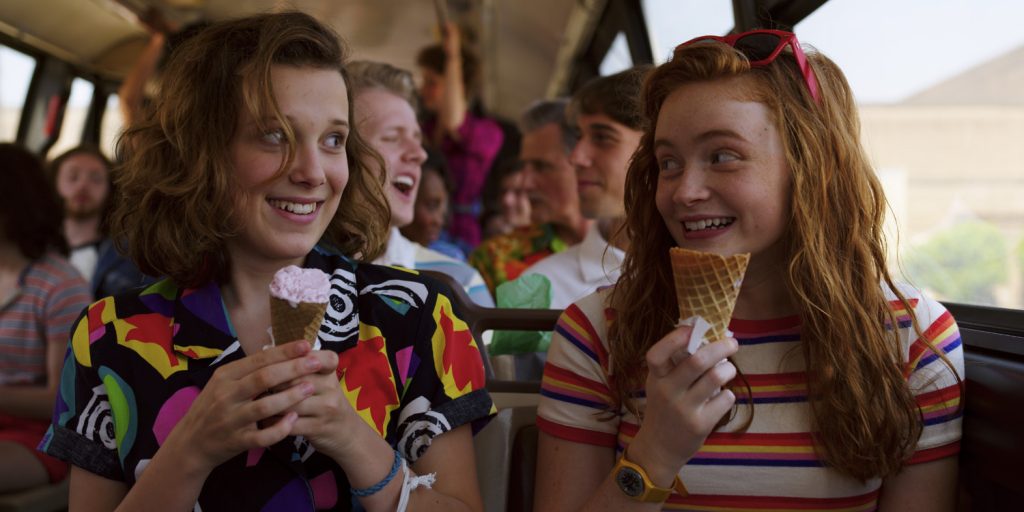 I can not say how much i can relate to STRANGER THINGS, i love everything about it, every time i watch an episode of the hit series i feel like i am coming back home for the first time in years.

A safer place and time for your kids to grow up, although it may not seem like this from the series.

That is not exactly what i am talking about though, but what i am trying to convey here is that it was a safer time to roam the local neighbourhoods and leave you’re  bike on the road knowing that it would be still there when you returned to collect it and it would not be stolen,

It was a safer time when parents could tell their kids to be home and be in bed by 10pm.

To a certain degree early on in season one of Stranger Things all of these moments are described accurately,  and i know that i and many others who love the show can relate to all of the above.

Season Three of STRANGERS THINGS is now streaming on NETFLIX