Due to a Spinal Tap esq’ rotating door of members, ‘Bury Me With My Money’ have been accused of biding their time over the past two years, by teasing the release of their first EP “Karosi”. However, during a small window of opportunity in the unforgettable year of 2020, the band did manage to find their feet long enough, to turn out a second EP, aptly titled… “Life as it comes”. 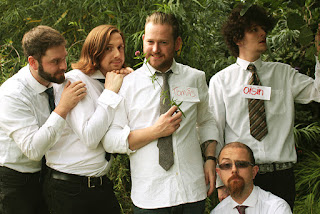 Bury me’ experienced major turbulence during the first few years of coming together. The band saw the coming and going of three drummers, until in late 2019 they found someone with more permanence in Galwegian, Adam Downey (best known for his work with Tracy Bruen & Jamie Harrison).

This same settling period saw producer Joseph Padfield, who joined lead singer Tomás Concannon at the band’s inception, make the move from synth & sample wizard, to bass player alongside long standing guitarist Oísin Brennan. Padfields move to bass left a gaping synth shaped hole in the band, one that was eventually filled by an Australian who only landed on Galway’s shores the first week of Ireland’s covid lockdown, Dylan Hooper. Hooper remained with the band for less than a year, but this was just enough time for the 2020 Bury Me With My Money line-up to complete work on their second EP – “Life as it comes”.

The new release from the five piece is a move from the longer, more experimental arrangements of ‘Karosi’, to shorter, more focused songs that could be accused of being pop tunes! The production and arrangements show much more punch and purpose this time round too, perhaps showing signs of a more defined “Bury Me sound”.