Looks like Girl Band will be making they’re way to Garbo’s in Castlebar Co Mayo in January 2016.

2015 has been a momentous year for Girl Band. At the year’s start their potent mix of groove and shattered guitar noise was the subject of excited whispers coming from those plugged into the Irish underground. By the fall they had released their debut album Holding Hands With Jamie on Rough Trade to acclaim from The Guardian, NME, NPR, Vice, and more, and were being named one of the best new bands of 2015 by Stereogum and one of the best rock bands active today by SPIN.

One look at the new video for “Baloo” from their Rough Trade session and it is easy to see why the band has been the subject of such adoration. The quartet harnesses existential anxiety and wields it like a weapon, crafting a captivating cacophony. The band will be returning to live action in early 2016, including their biggest hometown Dublin show to date on April 1st at Vicar Street, see below.

Holding Hands with Jamie, Girl Band’s debut album, comes a few years into their tenure; a few years after their first tour, nine days crammed into a Fiat Panda; a few years of stamping 7″ sleeves to sell at merch tables and mail-order; a few years of writing songs, touring and developing a live ferocity unmatched by nearly anyone.

Recorded in April 2015, two days after returning home from their first-ever US tour, the nine tracks making up Holding Hands with Jamie capture, more than any previous recordings, the tension and abrasive energy of a Girl Band performance.

Recalling any number of things but for only milliseconds at a time, Girl Band make a mockery of comparisons, because you can only get as far as “oh this bit sounds like–” before a guitar scuff-screams, the bass crunches like a car in a bailing press, or something else visceral and glorious comes from the speakers, and the thought’s erased. 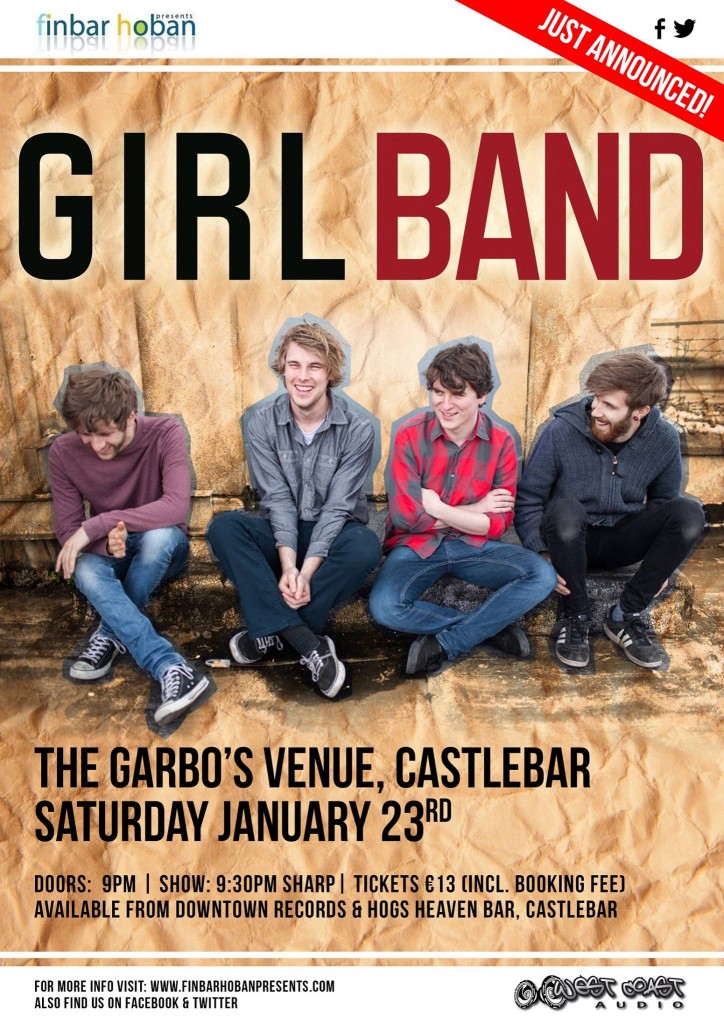 “If you hold to the increasingly reasonable opinion that indie rock has become too nice, too soft, too precious, too upwardly mobile and obsessed with pop, Girl Band are one of today’s finest antidotes for your woes.” – Stereogum, Best New Bands of 2015

“Biologically speaking, the sensations of pleasure and pain are closely related, and Ireland’s Girl Band straddles that line with no small amount of glee.” – Billboard

“A lot of bands blend drastically disparate influences, but few sound like the blender, too. Dublin four-piece Girl Band is one such act, slicing up parts of everything from no wave to techno, using guitar and drums like power tools as much as instruments.” – Consequence of Sound

“As with any great rock band, it’s not about who you sound like but how you sound like it, and the crazed lo-fi-cacophony you hear on this roaring, breathless 38-minute record, for all its reference points, is singular.” – SPIN

“A startling upending of any and all expectations you would dare place upon a modern rock group.” – Paste

“When I heard this next song,” Paul”, I felt decades of bottled frustrations and endless irritations come untethered from the dock and go out to sea.” – Robin Hilton, NPR All Songs Considered