After playing main stage of BARE In the Woods in 2018, supporting Fangclub, and performing sell-out shows in venues such as The Loft & Roisin Dubh in Galway, Waterford based alternative rock group. 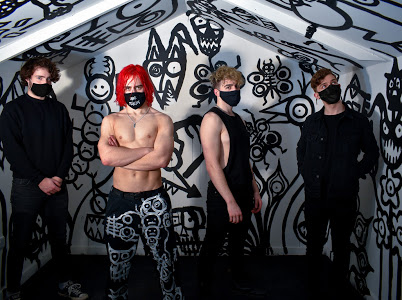 Their mature and refined brand of alternative-rock is growing with each release. Described as a “Big sound” , Under Starling’s style is opulent and exudes brooding, delicate soundscapes while dealing with themes such as life, death, love, and freedom.

The sheer anthemic power, which is evident in their live shows, and melodic beauty this band possess makes Under Starling a band to keep an eye on.

As the name suggests, Icarus is a modern take on the famous Greek myth of Icarus and Daedalus – ‘The Fall of Icarus’.

“The narrative of the song goes back and forth between 2 characters, an optimist wading through life’s oncoming choices, and a pessimist attempting to “clip their wings”, however in the end the optimist would rather crash and burn trying, than to never try at all.”

The pessimist realizes their efforts are futile as in the optimists’ mind, they’ve already “gone and flown”.

The end of the song introduces an auto-tuned vocal track which hints at the band exploring new musical territory in the album to come.

Check out the video for Icarus below