What seems to us that makes no sense, the bus from the movie Into The Wild has being removed from the Alaskan wilderness.

According to authorities in the area having being quoted as saying

‘This is an abandoned and deteriorating vehicle that was requiring dangerous and costly rescue efforts, but more importantly, was costing some visitors their lives”

The abandoned bus in the Alaskan wilderness that became a popular but dangerous pilgrimage for adventure seekers due to the book Into the Wild was removed via helicopter from its longtime resting place Thursday.

At least two hikers have died and over a dozen more rescued while in pursuit of the 1940s-era bus where Christopher McCandless, the subject of author Jon Krakauer’s Into the Wild, died of starvation in 1992; McCandless — who took shelter in the bus 250 miles north of Anchorage — kept a journal of his plight after the nearby Teklanika River swelled, making it unable to hike out of the area.

Since Into the Wild’s release in 1996 and the Sean Penn-directed big-screen adaptation in 2007, the bus became a popular destination for the like-minded adventure seekers from around the world that attempted to retrace McCandless’ journey. However, in 2019, a woman from Belarus drowned seeking out the bus, and last winter a search-and-rescue team had to be deployed for five Italian tourists who sought the “Magic Bus“ 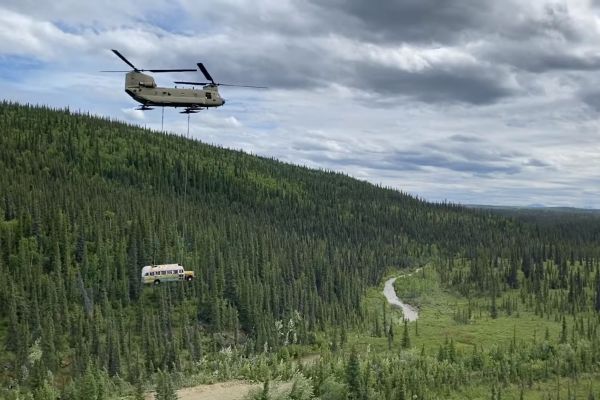 Mandatory Credit: Photo by ALASKA NATIONAL GUARD HANDOUT
A screen grab from video made available by the Alaska National Guard shows an Alaska Army National Guard helicopter airlifting an abandoned bus which became popular as ‘Bus 142’ or the ‘Magic Bus’ through the movie Into The Wild