I think it is safe to say the brand new single from Headroom is reminiscent of early alternative American group Sonic Youth which is not a bad thing at all.

We are always delighted to hear about original music being developed and recorded in Mayo.

None more so when we heard a Mayo act called Headroom were making it possible to record music during the current pandemic.

Headroom  first conceptualised the idea of the band  in August of 2019, when their  guitarist, Jamie van den Oosten and bassist, James Hopkins were jamming together.

They started by doing covers of some of they’re  favourite artists, such as Queen, Toto and Rex Orange County.

After a few months of Jamie and James trying to play as a duet for a while, we soon decided to bring some others in to the band.

Oisín Gómez-Kelly was next to join, he came in as a singer and pianist after learning to sing in various Westport choirs. Matthew Hart, the bands saxophone player came soon after to add a bit of flavour to there sound.

They spent most of early 2020 trying to find a drummer, and saving up for musical and recording equipment.

They found there drummer, Jonathan Ryan, in August, finally convincing him to take up drumming again. Orla McGlinchey, the bands  other singer, joined the month after to change the Headrooms vocal profile. 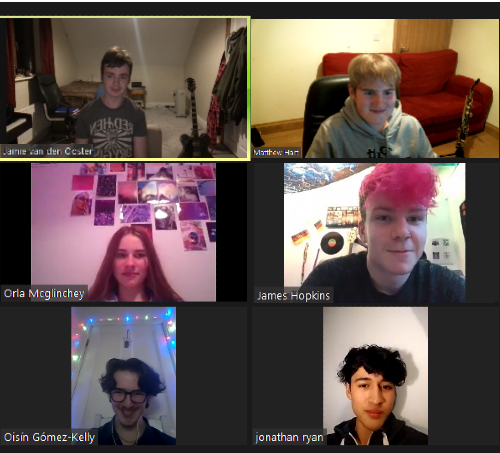 They have been struggling greatly to make music through the pandemic and various lockdowns, with all of them coming from different areas in Mayo and not being able to travel to record together. This can be seen by the fact we had to take our band photo on Zoom! Despite this, they have been able to release 3 new singles and continue work on our upcoming album,  which we hope to be able release by early summer this year. Our first release, As Time Goes On, came out in December of 2020 after months of work and dedication. Their latest single, Another Chance was released on the 4th of February.

The band tell us they look forward to being able to perform their songs live when able to again, eyeing up local festivals and performances across Mayo.

We are looking forward to hearing lots more from the band in the very near future, in the meantime check the latest single called ‘Another Chance’ below