The very first American college rock band i ever got the chance to listen to was R.E.M. (rapid eye movement) for those of you still wondering what the REM stood for.

I was probably about eleven the first time i heard Shiny Happy People but it was the band’s earlier catalogue that captured my ears. I still reckon Document is one of the greatest records of the eighties. 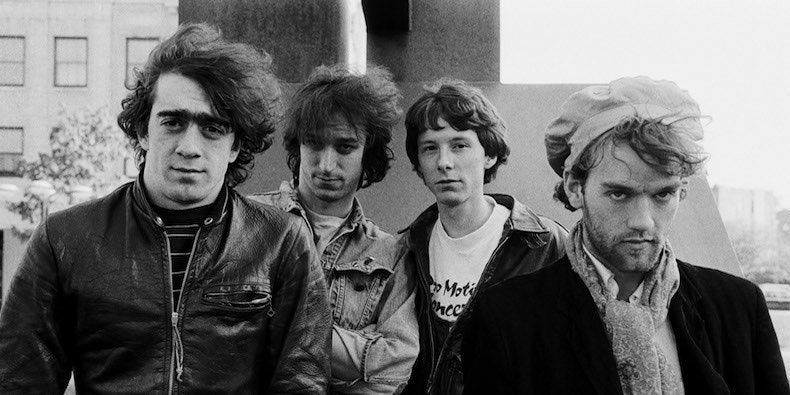 REM in the early days, the band became one of the biggest rock acts in the world alongside U2

Back then it was hard to pick up many of the bands earlier releases in the record stores around Castlebar.

R.E.M. release their debut single in 1981 under the name of Radio Free Europe , they formed in Athens Georgia in 1980.

It wasnt until 1983 the band released their debut album “Murmur”, the album went on to become Rolling Stone Magazine’s album of the year in the same year.

Following years of underground success it wasnt until 1987 the band scored their first major hit with the track with “The One I love” from the album Document.

Don Gehman was unable to produce R.E.M.’s fifth album, so he suggested the group work with Scott Litt. Litt would be the producer for the band’s next five albums. Document (1987) featured some of Stipe’s most openly political lyrics, particularly on “Welcome to the Occupation” and “Exhuming McCarthy”, which were reactions to the conservative political environment of the 1980s under American President Ronald Reagan.

Jon Pareles of The New York Times wrote in his review of the album, “‘Document‘ is both confident and defiant; if R.E.M. is about to move from cult-band status to mass popularity, the album decrees that the band will get there on its own terms.

“Document was R.E.M.’s breakthrough album, and the first single “The One I Love” charted in the Top 20 in the US, UK, and Canada.

By January 1988, Document had become the group’s first album to sell a million copies.

In 1990 REM reconvened to record one of their biggest albums to date, Out of Time. A very different record to its predecessor, members often wrote the music with non-traditional rock instrumentation including mandolin, organ, and acoustic guitar instead of adding them as overdubs later in the creative process. Released in March 1991, Out of Time was the band’s first album to top both the US and UK charts.

The record eventually sold 4.2 million copies in the US alone, and about 12 million copies worldwide by 1996. The album’s lead single “Losing My Religion” was a worldwide hit that received heavy rotation on radio, as did the music video on MTV and VH1.

“Losing My Religion” was R.E.M.’s highest-charting single in the US, reaching number four on the Billboard charts.

The album dealt with themes of loss and mourning inspired by “that sense of … turning thirty”, according to Buck.

Several songs featured string arrangements by former Led Zeppelin bassist John Paul Jones. Considered by a number of critics (as well as by Buck and Mills) to be the band’s best album, Automatic for the People reached numbers one and two on UK and US charts, respectively, and generated the American Top 40 hit singles “Drive”, “Man on the Moon”, and “Everybody Hurts”. The album would sell over fifteen million copies worldwide.[62] As with Out of Time, there was no tour in support of the album. The decision to forgo a tour, in conjunction with Stipe’s physical appearance, generated rumors that the singer was dying or HIV-positive, which were vehemently denied by the band.

Automatic for the People was released in October 1992. In the United States, the album reached No. 2 on the Billboard 200 album charts.

The album reached No. 1 in the United Kingdom, where it topped the UK Albums Chart on four separate occasions.

Automatic for the People yielded six singles over the course of 1992 and 1993: “Drive”, “Man on the Moon”, “The Sidewinder Sleeps Tonite”, “Everybody Hurts”, “Nightswimming” and “Find the River”. Lead single “Drive” was the album’s highest-charting domestic hit, reaching No. 28 on the Billboard Hot 100. Other singles charted higher overseas: “Everybody Hurts” charted in the top ten in the United Kingdom, Canada, and Australia.

In 1994 REM went on to release one of the biggest Rock records of the nineties titled Monster.

In January 1995, R.E.M. set out on its first tour in six years. The tour was a huge commercial success, but the period was difficult for the group.

On March 1, Berry collapsed on stage during a performance in Lausanne, Switzerland, having suffered a brain aneurysm. He had surgery immediately and recovered fully within a month. Berry’s aneurysm was only the beginning of a series of health problems that plagued the Monster tour. Mills had to undergo abdominal surgery to remove an intestinal adhesion in July; a month later, Stipe had to have an emergency surgery to repair a hernia.

Despite all the problems, the group had recorded the bulk of a new album while on the road. The band brought along eight-track recorders to capture its shows, and used the recordings as the base elements for the album.

The final three performances of the tour were filmed at the Omni Coliseum in Atlanta, Georgia and released in home video form as Road Movie.

R.E.M. re-signed with Warner Bros. Records in 1996 for a reported $80 million (a figure the band constantly asserted originated with the media), rumored to be the largest recording contract in history at that point.

The group’s 1996 album New Adventures in Hi-Fi debuted at number two in the US and number one in the UK. The five million copies of the album sold were a reversal of the group’s commercial fortunes of the previous five years.

Time writer Christopher John Farley argued that the lesser sales of the album were due to the declining commercial power of alternative rock as a whole. That same year, R.E.M. parted ways with manager Jefferson Holt, allegedly due to sexual harassment charges levied against him by a member of the band’s home office in Athens. The group’s lawyer Bertis Downs assumed managerial duties.

The band noted that they borrowed the recording process for the album from Radiohead, who recorded some of the basic tracks for The Bends while on tour and who supported the band in 1994 and 1995. R.E.M. took eight-track recorders to capture their live performances, and used the recordings as the base elements for the album. As such, the band’s touring musicians Nathan December and Scott McCaughey are featured throughout, with Andy Carlson contributing violin to “Electrolite”.

During this time i think it also important that Michael Stipe releasesd a solo track with Kirstin Hersh of Throwing Muses fame called “Ghost”, check it out below

Critical reaction to the album was mostly favorable. Several publications lauded the album for its rich diversity, including Rolling Stone, Q, and Mojo. Stephen Thomas Erlewine of AllMusic said, “In its multifaceted sprawl, [R.E.M.] wound up with one of their best records of the ’90s.”At the same time, however, Melody Maker criticized the album’s empty and flat sound caused by recording in arenas and soundchecks.

The album is Stipe’s favorite from R.E.M. and he considers it the band at their peak. Radiohead singer Thom Yorke, who cited R.E.M. as a major influence, said it was his favorite R.E.M. album, and that “Electrolite” the greatest song of their career.

In April 1997, the band convened at Buck’s Kauai vacation home to record demos of material intended for the next album. The band sought to reinvent its sound and intended to incorporate drum loops and percussion experiments.

Just as the sessions were due to begin in October, Berry decided, after months of contemplation and discussions with Downs and Mills, to tell the rest of the band that he was quitting.

Berry told his bandmates that he would not quit if they would break up as a result, so Stipe, Buck, and Mills agreed to carry on as a three-piece with his blessing. Berry publicly announced his departure three weeks later in October 1997.

Berry told the press, “I’m just not as enthusiastic as I have been in the past about doing this anymore . . . I have the best job in the world. But I’m kind of ready to sit back and reflect and maybe not be a pop star anymore.”

Stipe admitted that the band would be different without a major contributor: “For me, Mike, and Peter, as R.E.M., are we still R.E.M.? I guess a three-legged dog is still a dog. It just has to learn to run differently

The band cancelled its scheduled recording sessions as a result of Berry’s departure. “Without Bill it was different, confusing”, Mills later said. “We didn’t know exactly what to do. We couldn’t rehearse without a drummer.”

The remaining members of R.E.M. resumed work on the album in February 1998 at Toast Studios in San Francisco.

The band ended its decade-long collaboration with Scott Litt and hired Pat McCarthy to produce the record. Nigel Godrich was taken on as assistant producer, and drafted in Screaming Trees member Barrett Martin and Beck’s touring drummer Joey Waronker. The recording process was plagued with tension, and the group came close to disbanding. Bertis Downs called an emergency meeting where the band members sorted out their problems and agreed to continue as a group.

Led off by the single “Daysleeper”, Up (1998) debuted in the top ten in the US and UK. However, the album was a relative failure, selling 900,000 copies in the US by mid-1999 and eventually selling just over two million copies worldwide.

While R.E.M.’s American sales were declining, the group’s commercial base was shifting to the UK, where more R.E.M. records were sold per capita than any other country and the band’s singles regularly entered the Top 20.

In the early 1980s, the musical style of R.E.M. stood in contrast to the post-punk and new wave genres that had preceded it. Music journalist Simon Reynolds noted that the post-punk movement of the late 1970s and early 1980s “had taken whole swaths of music off the menu”, particularly that of the 1960s, and that “After postpunk’s demystification and New Pop’s schematics, it felt liberating to listen to music rooted in mystical awe and blissed-out surrender.” Reynolds declared R.E.M., a band that recalled the music of the 1960s with its “plangent guitar chimes and folk-styled vocals” and who “wistfully and abstractly conjured visions and new frontiers for America”, one of “the two most important alt-rock bands of the day.” With the release of Murmur, R.E.M. had the most impact musically and commercially of the developing alternative genre’s early groups, leaving in its wake a number of jangle pop followers

On September 21, 2011, R.E.M. announced via its website that it was “calling it a day as a band”. Stipe said that he hoped fans realized it “wasn’t an easy decision”: “All things must end, and we wanted to do it right, to do it our way.”

The group discussed breaking up for several years, but was encouraged to continue after the lackluster critical and commercial performance of Around the Sun; according to Mills, “We needed to prove, not only to our fans and critics but to ourselves, that we could still make great records.

After a decade since the band disbanded Michael Stipe has just releases a brand new track on his 60th birthday. Check out the brand new track below titled Drive  to the Ocean