Since the success of Doppler’s debut single the band navigated through a host of challenging personal circumstances which halted their musical progression.

Jamie Mulrooney explains “ There are far more important things in life than releasing music (Jamie’s Dad is currently fighting a terminal illness) but it’s always there in the back of my mind.. It’s only now that we’ve had time to make this release happen and making music with Mick brings me pure joy. To release this single with him has been a long time coming for us both and it feels like the end of a long journey but the beginning of a new one at the same time.” 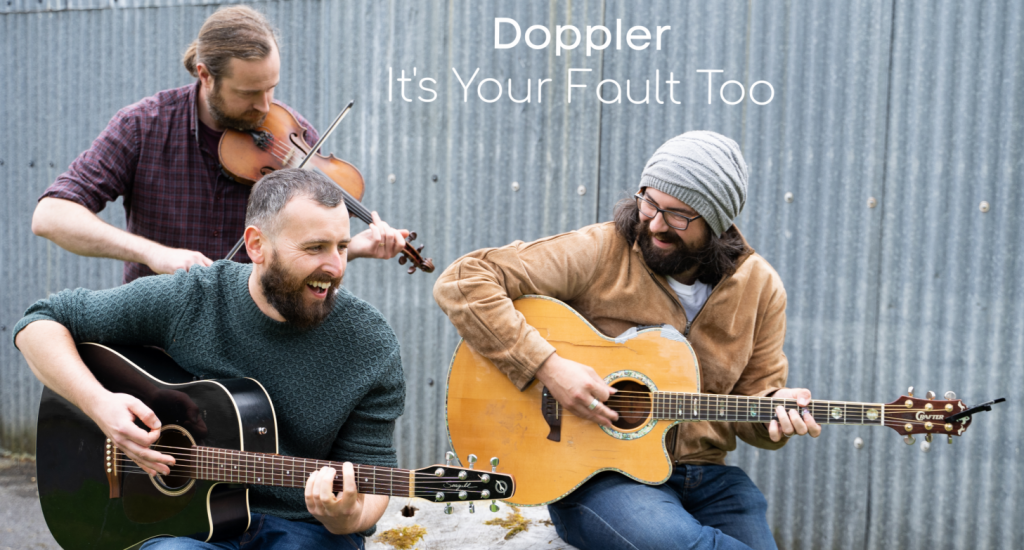 “It’s Your Fault Too” was born. With well renowned Raph Dziubinski (Joe Cocker/ Average White Band/ Simply Red) on percussion and Kevin Donnellan(BRÍDÍN/Third Rehearsal) laying his incredibly rich & diverse sound on fiddle, it was just a matter of days before the track was completed.

The video was filmed by award winning Irish filmmaker Fionn Rogers. The stunningly worked piece features a love triangle like no other featuring two mannequins as lead characters as well as Hardy Buck and social media influencer Owen Colgan (Netflix/RTÉ). “The video parodies several iconic rom-com scenes and hopefully the comedy shines through. It was a nightmare to shoot as the arms and legs kept falling off the mannequins. We just wanted to enjoy the process of making music videos and this is exactly what we wanted to create.” – explains Mick Dempsey.

This is the first release in over 2 years for the band but they have already scheduled 2 more releases later this year. “This feels like the start of something new for us both and we’re excited to see what people think of the new songs. We just want to be as prolific as we can and let our music do the talking for us”- Mulrooney